Awesome Blossoms come up 2nd in state for mascot contest

BLOOMING PRAIRIE — It’s a bit unusual to have a flower as a mascot. In fact, it’s the second most unique idea in the state. 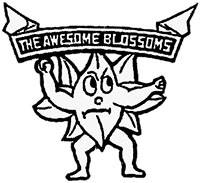 The Awesome Blossoms garnered a total of 143,784 votes, which is about 70 times the population of Blooming Prairie. That number fell short of the Winhawks’ 163,128 by about 6.2 percent of the total votes cast for a Minnesota mascot. The Jordan Hubmen, Roosevelt Teddies and Sauk Centre Mainstreeters each came in with less than 1 percent of the votes.

The Awesome Blossoms are an unusual mascot because they betray the mean-looking, animal-based icons of most high schools, Worke said.

“Everybody thinks of school mascots as rough and tough,” he said.

The blossom, however, is the opposite, and even avoids the typical bright color scheme in favor of black and white.

The blossom tradition is deeply ingrained in the Blooming Prairie community. At several points in the school’s history, the student body has taken a vote to change the mascot, Worke said. Every time, it has failed.

While Blooming Prairie’s mascot has been recognized several times for its uniqueness, this is the first such competition it has been involved in.

“About two weeks ago USA Today had contacted me and said they were going to run this survey,” Worke said.

He submitted the necessary materials with information about the school’s mascot and included a logo along with it. A week later, USA Today told him Blooming Prairie’s mascot would be one of five chosen to represent Minnesota.

From there, the contest relied on the town’s efforts. As the days of polling ticked by, the voting movement picked up more and more steam.

“It’s kind of neat how the community contacted the school,” Worke said, adding seniors were urging students to vote and a push was being made over Facebook, as well. “The conversation about the contest has really grown.”

While Blooming Prairie lost to Winona, Worke said he was impressed by the Awesome Blossoms’ turnout, considering how much smaller the city is than Winona.

Each of the 50 states plus Washington, D.C. had five mascots participate in the first round. The state contest nationwide attracted more than 6.3 million votes during the days of voting, according to the USA Today High School Sports website.

The Winhawks and other first-round winners will continue on to a regional round, and, if successful there, will move on to the finals for most unique mascot in the country. Polls close for the final round on March 25. The national winner will receive $2,000, with the four runner-ups getting smaller cash prizes.