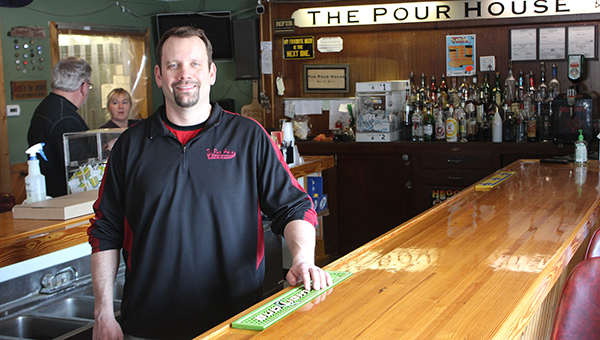 CLARKS GROVE — The Pour House now can pour outside the house.

The bar and grill in Clarks Grove has acquired a license for off-site liquor sales, allowing owner Brian Lambert and his crew to work at weddings, parties, banquets and fundraisers. Presently, one event is on the bar’s off-site schedule, but Lambert is looking to get the word out that the Pour House can serve alcoholic beverages at functions.

The Pour House is in its fourth year of existence. Lambert and his wife reside in Medford and for two years have sought to sell their house. Once a sale happens, they intend to move to the Albert Lea area. His wife works in Owatonna.

He used to work in the automotive field in the Twin Cities, selling paint and body supplies to repair shops. He was looking for a change of pace when he bought The Bulldog bar in Clarks Grove and gave it a new name. He enjoys cooking food and intends to have a new food menu in a couple of weeks, he said. The bar and grill has about 10 employees.

The Pour House hopes to host a Texas Hold ’em league on Tuesday nights this summer and a beanbag toss league on Thursday nights. A starting date hasn’t been set, but there is a sign-up sheet at the bar.

Lambert decided to offer off-site sales because it is a means to expand his business. He said operating costs remain mainly the same, so the only way to increase sales is to go elsewhere.