Be an ‘upstander’ (by standing up to a bully) 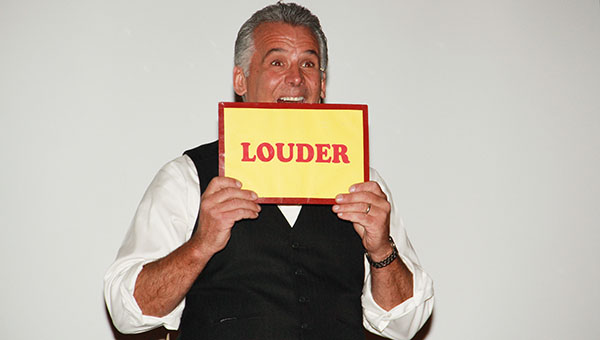 LAKE MILLS — A group of six Lake Mills seventh-graders did their part to spread a message of standing up to bullying Friday.

“It’s a big problem, so we decided to solve it,” said Megan Fritz one of the students.

As part of their Project Citizen class, the students raised money to bring speaker Jim Jelinske to the Lake Mills Community School on Friday afternoon. 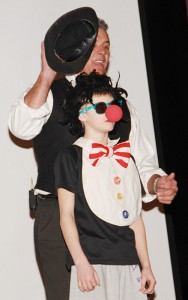 Speaker Jim Jelinske lifts a hat off of fifth-grader Tyler Helgeson’s head during an anti-bullying assembly Friday. Removing the attire showed the students that Tyler was just a person once he took off the bow tie, glasses and wig. — Jason Schoonover/Albert Lea Tribune

Jelinske, a public speaker for about 13 years, used a little magic, humor and personal stories to urge students to take a stand against bullying. He told students that they only need to follow three steps to stop bullying and change the world: stop, think, report.

“When you get them to stop, you become a hero,” Jelinske said.

Early in his speech, Jelinske told a story of a student named Brian, who was a skinny boy with thick glasses and a stutter that caused him to struggle to speak when he tried answering questions in class.

Some children would laugh and throw pencils at him when the teacher wasn’t looking.

One day, Jelinske told the students, Brian went to his school counselor asking to stay inside during recess, because the children picked on him.

The counselor told him to go outside, ask other children if he could play with them and to just walk away if they said no.

Brian followed the advice, but students made fun of him and shoved him, which caused Brian to run away as other children chased him.

Presumably trying to run home, Brian ran into the street and was hit by a car. He died a few days later.

Later in his speech, Jelinske revealed he was Brian’s school counselor who had urged him to go outside.

“I miss Brian every day,” he said, adding Brian would be 27 this year.

After Brian died, the students who made fun of Brian told the principal things like “we were just kidding” and “we didn’t mean it.”

The students who stood by and watched all said they didn’t want to be a tattle-tale.

Jelinske used this story to tell children how they can be “upstanders” by standing up to bullies and preventing something like Brian’s story from happening again.

“Upstanders stand up and speak out,” he said.

A key message Jelinske told the children is that no one deserves to be bullied. But if it’s happening, Jelinske encouraged the students to go to an adult or teacher to report the problem.

Jelinske defined bullying as repeated negative behavior by someone who doesn’t stop the when the victim asks. 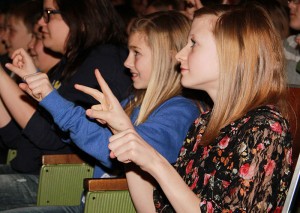 “Reporting is getting someone out of trouble,” he told the students.

But bullying won’t keep people down forever, as Jelinske showed the students pictures of famous people who were bullied.

One was President Barack Obama, who was made fun of in elementary school for having big ears.

“Today is the day that have to stand up for each other and be kind, because no one deserves to be bullied,” Jelinske told the students.

The six students have worked on their anti-bullying project since the beginning of the year.

Project Citizen is a class taken by all seventh-graders in Lake Mills.

It’s designed to help students be better citizens and get involved in their community, according to special education and Project Citizen teacher Gary Irons. 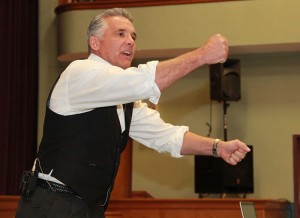 “They’re just trying to make a difference,” he said. “Even students can change things that are broken or wrong.”

The students won’t stop at the assembly, as the group of six is looking to change the school’s bullying policy, they’ll send a letter to parents about how to prevent bullying and they’ll present their case to local boards.

One part of the policy change could be harsher punishments for students caught bullying, which could include students missing a practice or game for a school sports team.

“So people actually stop to think about it,” Jacob said.

Like any school, seventh-grader Jacob Langenbau said bullying happens in Lake Mills, but he said it really goes in waves.

While bullying isn’t an abnormal problem in Lake Mills, Irons admitted that it happens in all schools.

“I think every school has it,” he said.

Irons said he hopes this program can help prevent bullying in Lake Mills.

“I think any bullying is too much bullying,” Irons said.