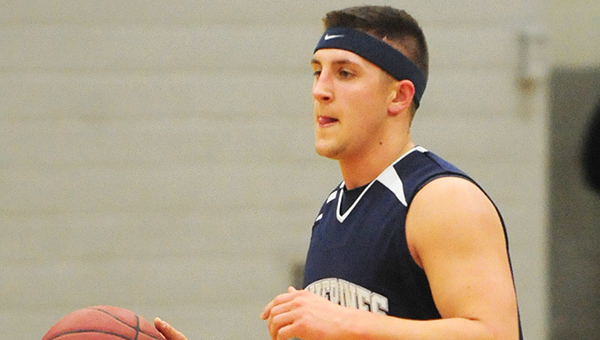 Derek Olson, a senior point guard from Glenville-Emmons dribbles the ball up the court in a make-up game against Cleveland on Thursday. Olson scored 15 of the Wolverines’ 22 first-half points. He also set a new school record with 100 made 3-pointers in a season, and he surpassed 1,000 points within the first five minutes of play. — Micah Bader/Albert Lea Tribune

GLENVILLE — After two scheduling attempts, both of which were postponed due to snowstorms, the Glenville-Emmons and Cleveland boys’ basketball teams finally took the court on Thursday.

Both schools already lost in the postseason. The Wolverines fell 63-47 to Blooming Prairie in the second round of sectionals, and Cleveland dropped a 65-63 game to New Ulm Cathedral in the first round.

However, both teams had pride to play for, and Glenville-Emmons’ Derek Anderson had even more than that.

Olson was three points shy of 1,000 career points, and he made it easily.

In the first half, Cleveland took an 8-7 lead. But, 3 minutes and 25 seconds into the game, Olson connected from downtown. The basket broke the 1,000-point barrier.

“We did a good job against their zone early,” Glenville-Emmons head coach Jared Matson said. “I talked about patience, we moved the ball well and found the best shot.”

Olson made three more 3-pointers in the first half and had 15 of Glenville-Emmons’ 22 points at the break. As Olson let it rain from beyond the arc, he hit another milestone: 100 3-pointers this season, a new school record.

“I just came out confident, hoping that they’d go in,” Olson said.

In the second half, Andrew Everson came alive on the glass and at the rim for the Wolverines. Everson earned a double-double with 12 points and 10 rebounds to go along with an assist, steal and blocked shot.

“It was Andy’s last game, and I told him at the half to come out aggressive and crash the boards,” Matson said. “And, that’s exactly what he did.”

After trailing by 10 points at the half, the Wolverines shaved their deficit to four points (34-30).

Despite late scores by Everson and Nick Anderson, the Wolverines lost by 13 points.

“They’re great examples for our younger guys,” Matson said. “They put in a lot of work off the court and in the weight room. I hope the younger guys take that from them.”

Glenville-Emmons finished the season with 6-22 overall, 4-14 in the Southeast Conference and 5-16 in Section 1A-West.