Funeral services for DeLores Wegner will be at 10 a.m. Saturday at Zion Lutheran Church. The Rev. Joel Vano will officiate. Interment will be at Hillcrest Cemetery. Visitation will be one hour prior to the service at the church. Online condolences are welcome at www.bayviewfuneral.com.

DeLores was born at home on the farm south of Lakefield on Dec. 18, 1929, to George and Dora (Droll) Rients. Her brother Verland was born in 1936. She was baptized and confirmed at St Paul’s Lutheran Church, Rost Township rural Lakefield. She attended Sioux Valley School where she participated in class plays and graduated in 1948. She spent many hours creating music by playing the piano while her brother played the steel guitar and her father played the accordion. 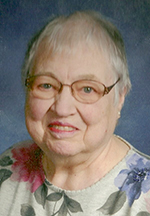 On Feb. 19, 1950, she married Harlan Wegner at St. Paul’s Lutheran Church. On March 4, 1951, daughter Beverly Jean was born. DeLores and Harlan farmed near Odin, Lake Park and Lakefield. In 1960, their family moved to Albert Lea and in 1976, Harlan and DeLores moved to Hayward to be near Bev’s growing family of young boys.

DeLores worked at the Hyde Building Coffee Shop, the Patio Cafe, the Country Club, Zion Lutheran Church as secretary, Dr. N. C. Brownlow as dental assistant, and the Good Samaritan Society business office from which she retired in 1995.

DeLores loved people, especially small children. She was a strong advocate for those less fortunate than herself. She paid medical bills and purchased food, clothing and gas for others. DeLores enjoyed the music of Lawrence Welk, Guy Lombardo, Kenny Rogers, Charley Pride and Randy Travis. DeLores and Harlan enjoyed dancing the jitterbug and old tyme at the Terp, the Golden Bubble, the Sioux Valley Steak House and camping with friends and family. She enjoyed making deviled eggs, scalloped corn and rhubarb cake.

Traveling included a trip to California, attending the wedding of her grandson Brock in Florida in December 2010, 10 trips to Branson, Mo., and the Spencer, Iowa, county fair.