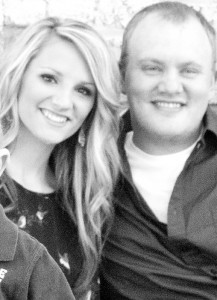 The bride is a graduate of Albert Lea High School and currently attends Rochester Community and Technical College for dental hygiene. She is employed as a receptionist at Studio 22 salon.

The groom is a graduate of New Richland-Hartland-Ellendale-Geneva High School. He graduated from Minnesota State University-Mankato with a bachelor of science in law enforcement. He is currently employed with the Albert Lea Police Department.