Examining the state’s successes and challenges in education 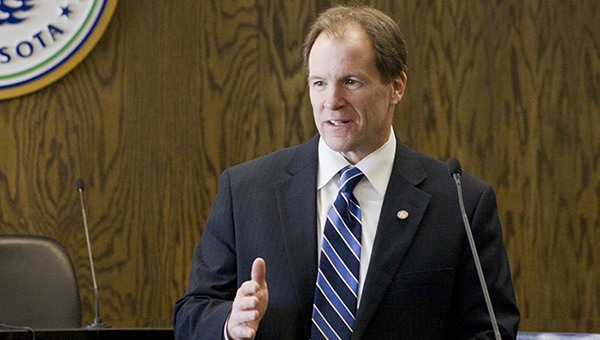 Those were just a few of the concerns expressed Friday during a town hall meeting with state House Education Finance Committee Chairman Paul Marquart and District 27A Rep. Shannon Savick, DFL-Wells, at Albert Lea City Hall.

Marquart, DFL-Dilworth, is traveling around the state to give a presentation about the state’s education system and what should be done to put children on the path to become the world’s best workforce. He traveled to Mankato earlier Friday, and visited Morris and Moorhead last week.

About 45 people — including superintendents, school board members, teachers and other community leaders — attended the Albert Lea meeting. 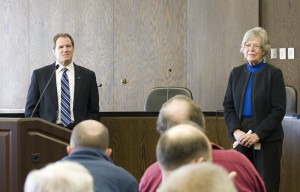 “We’re no longer plopping dollars on the formula,” said Marquart, a social studies teacher. “Every single dollar has to go for efforts and strategies that have a proven track record of improving student performance and closing the achievement gap.”

He said he was impressed in Albert Lea by the positive discussion about early childhood education and all-day, every-day kindergarten, along with the overall support for education.

Joan Anderson, a teacher at the Area Learning Center at Brookside Education Center, said she thinks more needs to be done to strengthen parent education for children younger than preschool age.

“I think we need to broaden our scope in education,” Anderson said.

Marquart said he supports allowing the school districts to choose if they want to start earlier.

In a packet handed out to people in attendance, the House Education Finance Committee’s priorities were identified as follows:

• Raising student performance and closing the achievement gap through efforts with a proven track record of results.

• Investing in things that work — including early childhood education and all-day, every day kindergarten.

• Assuring all students are reading at grade level by third grade.

• Putting a greater emphasis on identifying off-track students and helping them correct course in middle school and high school.

• Aligning high schools with higher education institutions to better prepare students for a career and college.

• Minnesota is 47th in the nation for class size.

• Minnesota’s achievement gap is among the worst in the nation — in the bottom 20 percent.

• The state’s four-year graduation rates have slipped to 29th in the nation — 77 percent.