First one in, last one out 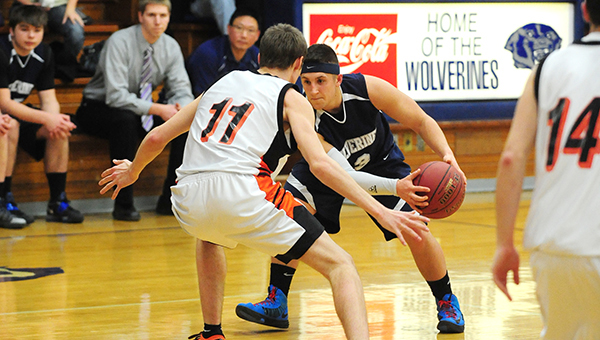 Derek Olson of Glenville-Emmons holds the ball on the perimeter during his final high school basketball game against Cleveland, as head coach Jared Matson looks on from the sideline on Thursday. Olson earned more than 1,000 points over his prep basketball career. He also holds the record for 3-pointers in a season with 100. — Micah Bader/Albert Lea Tribune

GLENVILLE — A fondness for basketball grew in Derek Olson from a young age, and it blossomed into 1,000 career points in his final prep game on Thursday night.

“I’ve been playing ever since elementary school,” Derek said. “My grandpa used to be the athletic director here (at Glenville-Emmons). He’d always open the gym and let me shoot.”

“Well, Derek would call me up on evenings and weekends and say, ‘Hey grandpa, whatcha doing?’” Wayne Olson said. “So, he’d come on down and shoot in the gym or he’d go to the weight room. He lived over there.”

“Derek is the definition of a gym rat,” he said. “He’s usually the first one here putting up shots before practice, and when I’m waiting to put balls away, he’s always the last one here.” 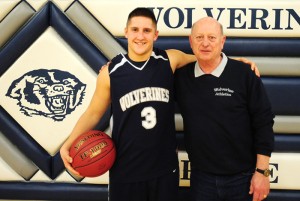 All of that practice paid off on Thursday night, as Derek ended his high school basketball career with 1,015 points in a game that was re-schedued twice due to a pair of snowstorms.

Derek also finalized his new record for 3-pointers in a season with 100. He broke the old record, which was also his from last year.

“He’s quiet. You couldn’t even tell tonight was any different,” he said. “I think I was more nervous than he was. He handles it really well. He handles the pressure, too.”

After the Wolverines lost a key scorer to a knee injury, more of the burden was piled on Derek, who didn’t seem to be phased.

Anderson also mentioned that Derek likes to keep a light mood in the gym.

In his final game against Cleveland, Derek scored 15 of the Wolverines’ 22 first-half points.

Matson first coached Derek on the football field as an assistant. He said that Derek took charge of the football team, too.

“With Derek, he was pretty much the key focus of our offense,” he said. “He was getting a lot of carries. He’s progressed the same way in basketball. He’s used to carrying the load.”

As impressive as 17.8 points per game with a team-high 58 steals on the basketball court is, Derek will be playing football in college.

He received an academic scholarship to Upper Iowa University in Fayette, Iowa, where he will major in business management and play running back on the football team.

With a 3.95 grade-point average, Derek has also been working hard academically.

“In the classroom, he’s outstanding,” Matson said. “When we have grade checks, I know that I never have to worry about Derek having trouble with grades. And, I’m sure that’ll carry on with whatever he decides to do in college.”

“He always wants to get better and improve his game,” he said. “He is the first one in and the last one out.”