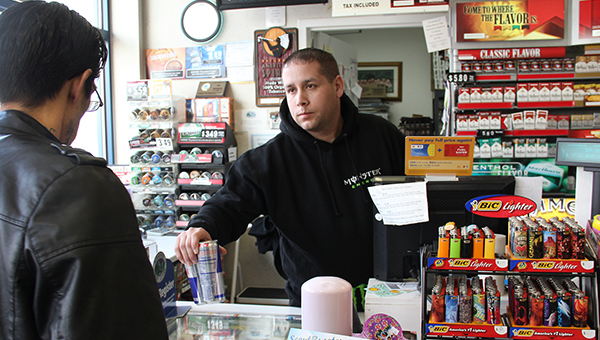 Ole’s Eastside Shell employee Roque Medrano rings up a customer Friday at the gas station. Medrano, who makes minimum wage, said he is in favor of a minimum wage increase, but he questions how it would in turn affect prices of other things. –Sarah Stultz/Albert Lea Tribune

Will an increase in minimum wage benefit or harm the local economy?

While some said they are in favor of an increase for minimum-wage earning employees, they questioned the effects it would have on other employees and, in turn, other prices.

“My luck if they raise minimum wage up they’d raise everything else up, too,” said Roque Medrano, who works for minimum wage at Ole’s Eastside Shell.

Medrano said he would be in favor of a wage increase to support him and his family but is cautious.

Albert Lea-Freeborn County Chamber of Commerce Executive Director Randy Kehr said he thinks a two- or three-dollar increase in the minimum wage would affect the community at many levels.

If the change goes into play, business owners would have to decide how to absorb the increased costs of staffing and whether to pass those costs onto the customer.

They would have to decide how increases would affect those employees currently making a dollar or two above minimum wage, he said.

The state’s current minimum wage is $5.25 for small employers and $6.15 for large employers, though many businesses pay the federal wage of $7.25 an hour.

A bill being heard in the state House of Representatives would raise the minimum wage to $9 an hour for small employers and $10.55 for large employers by 2015.

David Mord, general manager of the Green Mill restaurant, said at $7.25 an hour it is already expensive to bring in an employee and train them.

He said he is concerned about job losses and increased menu prices if a minimum wage increase were to pass.

Mord said many of the employees at the restaurant start out at minimum wage and he likes to challenge the employees to improve and work their way up in pay.

Glenda Erickson, manager of Ole’s Shell, said while a raise in the minimum wage would have a positive effect on her income, she recognizes the effects it would have on the owner of the business.

“It goes both ways,” Erickson said. “I could see where it would hurt small business owners, but I could also see where it’s a plus side to the employee as well.”

The cost of these employees are paid for in the city’s general fund, which is funded mostly through local government aid and property taxes, she said.

But he does not support some of the wage increases being proposed, as he said it is already difficult enough to keep business in the state.

“When the minimum wage goes up, everything else goes up,” Brickson said.

He said with the last minimum wage increase, the prices of gas increased shortly after.

“Without our thrift store, we can’t run our programs,” he said.