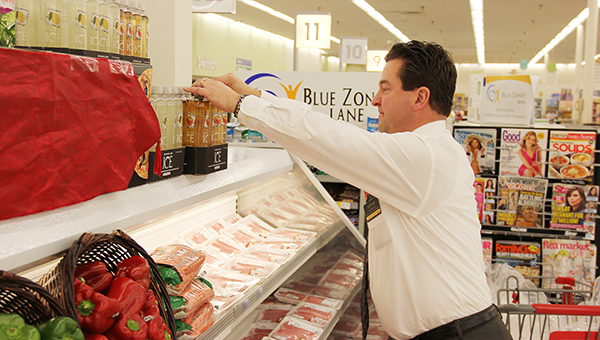 Shoppers are accustomed to seeing oranges on their local grocer’s fruit stand. A snowmobile, however, is another story.

“We tied it into a citrus display,” said Steve Shahan, gesturing to where the vehicle used to hang suspended from the ceiling. “It wasn’t easy.”

Shahan, store operations manager at the Albert Lea Hy-Vee, said the orange-colored Arctic Cat snowmobile made a good winter display item and played into Hy-Vee’s orange color theme. Designing creative and eye-catching displays is a weekly project at the supermarket.

“We’ll take things around our ad theme and try to elaborate on that,” Shahan said.

The store’s managers gather once a week to swap ideas and figure out what to do for the next display change. Sometimes, the store targets seasonal themes, which can span the gamut from holiday imagery, such as the Easter eggs hanging now and the Valentines Day balloons on their way out, to special events, such as the upcoming NCAA Final Four playoffs.

Other times, the store managers target products that are in high demand or that they received at a discount for buying in bulk, and set them aside with a display to draw attention to them. Hy-Vee has begun promoting its “Super Saver” gas card recently through store displays.

Rather than be sent down from corporate, the managers pool their own ideas and see them through to completion.

“We have the flexibility to build whatever type of displays we want to build,” Shahan said. “You get a group of people together and come up with an idea.” 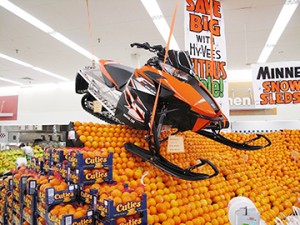 Hy-Vee employees hoisted a snowmobile atop a display of navel oranges. It was tethered to support beams in the ceiling.

Now and then, one Hy-Vee location will borrow an idea from another, or find ways to tweak it for improvement. Regardless of how they arrived at an idea, the managers find a way to put it together so it can be both safe and appealing to the eye. Some of the more complicated ones need to be done away from the day’s peak hours, when fewer customers are in the store and there’s more room to work.

The snowmobile was one such display, which had to be tethered to support beams in the ceiling to give it the illusion it was floating over the orange stand.

“It seemed to grab a bit of attention,” Shahan said.

Produce Manager Todd Brouwers said the idea for the project came when they realized Arctic Cat offered a snowmobile the same color as January’s yearly theme of orange. He joked the store was feeling pressure to one-up itself on future displays.

“Maybe we’ll hang a four-wheeler from the ceiling,” Brouwers said.