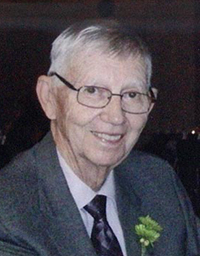 A funeral service for Ken will be at 11 a.m. Thursday at the First Lutheran Church, 309 N. Ninth St., Northwood, with the Rev. Judy Converse officiating. Military honors will be accorded at the church following the service by members of Our Buddies VFW Memorial Post 6779. Burial will be in the London Deer Creek Cemetery, rural Northwood. Visitation will be from 5 until 7 p.m. on Wednesday at the Conner Colonial Chapel, 1008 First Ave. S., Northwood. Visitation also will be one hour prior to service time on Thursday at the church.

Kenneth LaVern Logemann was born on July 11, 1937, in Albert Lea, the middle child of J. Barney and Martha (Aurdal) Logemann. Ken was baptized and reaffirmed the faith of his baptism through confirmation in the Deer Creek Valley Lutheran Church. He attended rural country school in Deer Creek Township and graduated from Northwood High School in 1955. Ken attended Iowa State University in Ames and while there joined ROTC. Ken was inducted into the Army in 1958 and served his country honorably and faithfully until his discharge in 1960. He was united in marriage to Rebecca “Becky” Buenneke on May 26, 1962, and to this marriage two daughters were born, Rhonda and Renae.

Ken farmed on the family farm for several years. Horses were an important part of his life in which the family built a successful breeding and training facility, and after retiring from farming, he began his sales career in the agriculture field. Ken enjoyed politics and served on the county and state GOP level, was an alternate and delegate to two national conventions, served as state legislator for three sessions, and later he managed the field office for Charles Grassley until he accepted Ronald Reagan’s offer to be his state campaign manager. He also served as the first secretary of the Iowa State Soybean promotion board and attended two national conventions.

Ken enjoyed playing softball and sponsored a bowling team. He was very active in Farm Bureau and was the township director and chairman, and was a very active as a member and leader of 4-H, as well as many other organizations. Ken loved to attend all the grandchildren’s school and sports activities.

Ken was a loyal church member in both Deer Creek Valley Lutheran Church and First Lutheran Church. He was a Sunday school teacher, usher, greeter and served on the church council.

Ken was preceded in death by his parents; brothers-in-law, Bud Weiland, Harold Ringleb and Harold Behle; a sister-in-law, LaVon Behle; and a nephew, Joseph Behle.