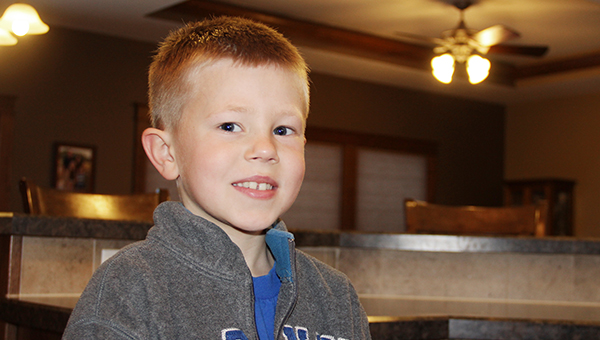 Kevin Coss/Albert Lea Tribune
Kinser Hanson, 8, underwent open-heart surgery only days after he was born. Today, he is a healthy, energetic boy.

Eight years ago, a Mayo Clinic Health System nurse in Albert Lea was giving newborn Kinser Hanson a bath when she realized something was wrong. The infant’s fingers, toes and lips had turned purple.

“That was their first sign that it was probably heart-related,” said Kinser’s mother, Carrie Hanson.

Kinser would come to be diagnosed with transposition of the great arteries, a heart defect where the pulmonary artery and the aorta are reversed. The resulting shortage of oxygen in the blood could prove fatal for a child. Today, following an operation and regular checkups, Kinser is an active and energetic 8-year-old boy, and his parents, Carrie and Scott, are sharing his story with the community.

“He’s just like any other kid right now,” Carrie said. 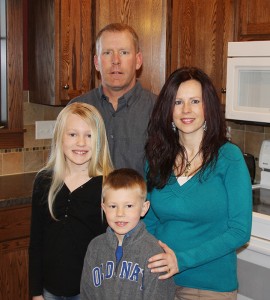 Kevin Coss/Albert Lea Tribune
Kinser Hanson, 8, stands with his parents, Scott and Carrie, and sister, MaKenna, at their home in Lake Mills. Kinser underwent open-heart surgery five days after he was born to correct a heart defect, and today is a healthy, active boy.

Kinser was about four hours old when the nurse noticed his condition. It came as a shock to Carrie and Scott, since they had no idea anything was wrong during pregnancy. Medical staff brought an X-ray machine down to the nursery to check on Kinser’s heart. It was enlarged, another clue something was wrong.

Albert Lea staff members were unable to determine exactly what the issue was, so an ambulance took Kinser to the Mayo Clinic in Rochester. Scott followed and waited for a few hours while they examined the newborn in the Neonatal Intensive Care Unit.

“They ran a bunch of tests on him,” he said. “That’s when they told me he needed open-heart surgery.”

By this point, it was about 4 a.m., and Kinser was only 12 hours old. Scott was in disbelief.

“He looked healthy as a horse when he was born,” he said.

Mayo staff monitored Kinser for a few days. There was enough oxygen in his blood to hold him over for now, but he would need surgery to ensure he survived, Carrie said.

While there was always the possibility of complications, Scott said the surgeons were confident the surgery would be a permanent fix to Kinser’s heart problem.

The operation took place when he was 5 days old and lasted half a day. It was a success. Kinser was allowed some time to recover, then Scott and Carrie went to go check on him.

“They really prepped us before we went into the room,” Carrie said. “The nurses were wonderful as far as telling us what to expect.”

Kinser was hooked up to a number of tubes and medical equipment. A fresh scar was visible over his heart where the surgeons had cut. Today, pictures and keepsakes from that day are preserved in a scrapbook at the Hanson house in Lake Mills.

During recovery, Kinser hit a snag. When medical staff removed the drainage tubes, his left lung collapsed. They put it back in place, and had to remove it twice more before the lung stayed inflated on its own.

When he reached 17 days old, Kinser left the hospital and came home with his family. Carrie said he went back for checkups after six weeks, then six months, then a year. The visits gradually became less frequent as Kinser’s health held, and eventually, he was able to stop taking heart medication.

The only problem to show up so far has been a leaky aortic valve — a common problem for people who suffered Kinser’s type of heart problem.

A pediatric cardiologist recommended Kinser avoid high-intensity sports like wrestling, football and basketball. Otherwise, he’s able to stay active and behave like any other 8-year-old boy. He runs around during recess and gym class at school and never feels worn out after getting exercise. Scott and Carrie have encouraged him to try out sports like golf and Little League baseball.

While he occasionally feels like he’s left out of certain activities, Carrie said Scott understands the doctor’s recommendations to avoid higher-intensity sports.

“He’s pretty accepting of it,” she said.

Kinser still has the scar, though doctors anticipate it will fade as he gets older.

“He’s fully aware of what happened,” Scott said. “We’ve taken him back to day one and shown him pictures of what he went through.”

Last year, Kinser’s grandfather had to have bypass surgery in Orlando, Fla., during a vacation. When he returned, he and Kinser were able to bond over their heart surgery scars.

While her child has stayed in good health, Carrie said there’s always a bit of anxiety when Kinser goes for a cardiogram. Doctors are monitoring his leaky valve to see if it gets any worse or better. There’s a possibility Kinser may need to undergo surgery again later in his life. When he gets a little older, doctors will be able to give him a stress test to gauge how well his heart would react to high-intensity physical activity.

“I’m just happy and thankful that we’re still close to Rochester,” Carrie said, adding she and Scott have a lot of confidence in the staff at Mayo. “We know we can be there in an hour and 45 minutes.”

In 2011, Kinser’s story came up during The Beat Goes On, a fundraiser for heart care. Jennifer Levisen, public affairs specialist with Mayo, said an article ran in the Fall 2011 newsletter Hometown Health.

Later, in May 2012, Mayo connected with the Hansons to set up a video shoot. A film crew showed up at their house and continued on to shoot film at a baseball diamond and a pool. The finished product was a minute-long commercial. The commercial is still airing and can be seen on Pandora, an Internet radio website.

“They picked up on Kinser’s story and were able to get some video of it,” Levisen said. “It was nice to be able to throw that into the mix and shed some light on that.”

In July, Mayo staff got back in touch to offer Kinser a chance to go to a Twins game in Minneapolis and throw the first pitch at Target Field.

“It was Mayo’s way of saying, ‘Hey, thanks, we appreciate your help,” Scott said.

Kinser himself likes to browse the photos from his surgery. He prefers not to talk about his heart issues with his friends, he said, and they typically don’t ask him about it. The subject is still a little scary to him.

Nevertheless, the Hansons are living their lives, keeping an eye on Kinser’s heart but not letting it weight them down.

“His condition hasn’t changed our life or what we do,” Scott said.