Locals happy with news of pope

Local Catholics reacted with surprise and excitement Wednesday to news that Argentine Cardinal Jorge Bergoglio was elected as the next pope for the church.

Shortly after Bergoglio — who took the name Pope Francis — spoke to crowds in St. Peter’s Square in the Vatican City, a few members of St. Theodore Catholic Church in Albert Lea could be seen hanging white and yellow bunting around the main doors of the Clark Street church.

The bunting signifies a new pope has been chosen, and it will stay in place for seven days.

“It’s exciting to have a new pope and see what new things he’ll do,” said St. Theodore member Judy Raiche. “I’m sure he’ll be a wonderful spiritual leader.” 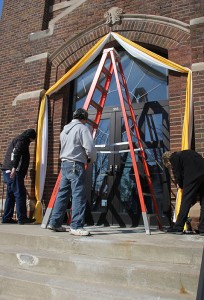 Three people from St. Theodore Catholic Church put up white and yellow bunting around the front doors of the church Wednesday afternoon to signify the selection of a new pope. The bunting will hang for seven days.

Francis, 76, is the first pope from Latin America.

Though local residents and church leaders said they did not know much about Francis other than where he was from, they quickly found out he desired to be a force of unity and a heart for the poor, said the Rev. Timothy Reker, who leads parishes in Albert Lea and Twin Lakes. Francis also expressed an intent to repair the church in a time of turmoil.

His name draws connections to the 13th century St. Francis of Assisi, who saw his calling as trying to rebuild the church, and Francis Xavier, one of the 16th century founders of the Jesuit order that is known for its scholarship and outreach.

Reker said he knew Francis was in the running in the conclave when Pope Benedict XVI was ultimately chosen, but he did not think Francis’ name had been mentioned much going into the most recent conclave.

The local Catholic church leader said he was present for the election of Pope John Paul II in 1978, and it brought back memories of that experience.

Reker said he had guessed the new pope would come from Central or South America. Latin America has 40 percent of the world’s Roman Catholic population.

Steffes said the pope appears to be a deeply spiritual person and a humble leader of millions of people around the world as the earthly representative of Christ.

“Already, in his name — Francis — I think he’s telling the world a lot about himself,” Steffes said. “Certainly emphasizing simplicity and humility, it’s obvious to me he’s a man of deep prayer as well.”

The election of Francis began after Pope Benedict XVI announced in February he would resign at the end of the month. Francis was chosen for the position on the fifth vote of the conclave, one of the fastest in years.

Manny Madrigal, a member of St. Theodore Catholic Church and custodian for both the church and school, said he was surprised to hear Francis was from Argentina.