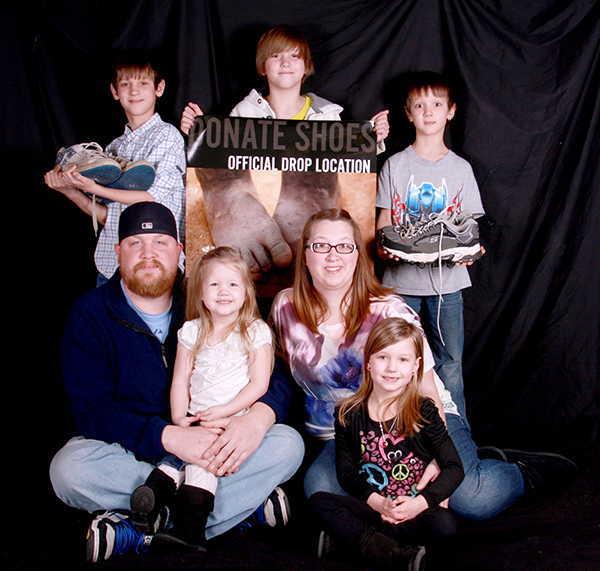 Randy Harig and his family are holding a shoe drive in to collect old shoes for Project Sole, a nonprofit charity. The shoes will go to needy people in countries overseas. Back row from left are Joshua Everett, 9, Garrett Everett, 11, and Lucas Everett, 8. Front row from left are Randy Harig, Addison Harig, 3, Nikki Everett and Paige Everett, 6. — Brandi Hagen/Albert Lea Tribune

Then he leads a drive to donate shoes for charity

Randy Harig survived a “zombie apocalypse,” and it inspired him to collect old athletic shoes for less fortunate people around the world.

Harig, who works for Alliant Energy, decided to hold a shoe drive in Albert Lea with the help of his family after he participated in last July’s Run for Your Lives, a 5-kilometer zombie-infested obstacle race held in partnership with the American Red Cross in Millville and across the U.S.

After the run, participants were asked to donate their shoes to Project Sole, and Harig donated his shoes, which inspired him to spearhead his own shoe drive to set a good model for his children.

“What a better way to lead by example and just show them that it’s a good thing to donate and not necessarily feel that you need to get something in return,” Harig said.

Run for Your Lives is similar to flag football. Runners wear three flags, and if they make it through the course without losing all three, they’ve survived the zombie horde. It’s not just running, as the “survivors” must deal with things like cargo nets, monkey bars and more.

“They have you crawling through creeks, running up hills and people chasing you the whole time,” Harig said.

Harig is a bit of a zombie fanatic. He is a fan of George Romero classics like 1978’s “Dawn of the Dead,” as well as more modern zombie films and televisions shows.

“We never miss ‘The Walking dead,’” he said, adding that only he and his girlfriend, Nikki Everett, watch the shows, but their children are still too young for the shows.

While Harig noted he’s not a marathon runner, he said he was happy to run from the 20-plus “zombies” chasing him, even if it was a bit exhausting.

“I felt absolutely worthless after it,” Harig said. “I was very tired.”

After he donated his shoes to Project Sole, Harig knew there’d be many people in Albert Lea interested in donating, but they wouldn’t necessarily be interested in the zombie-themed 5K obstacle race.

“That got me thinking: If people were donating shoes, why couldn’t I take a whole bunch of shoes and donate those there,” Harig said.

He bounced the idea off Nikki, and she was willing to help.

“I told him I’d support him in whatever he wanted to do,” she said.

“They jumped right on board with me,” he said of his family. “We’re looking forward to getting this in full swing.”

Harig contacted officials at Project Sole’s headquarters in Texas, and discussed his idea to collect shoes.

Project Sole is a nonprofit that collects and delivers athletic shoes to impoverished and disaster stricken areas around the world. Harig’s shoe drive is a bit different from most Project Sole drives. Typically, Project Sole donates $2 for each pair of shoes collected, so schools and organizations can use it as a fundraiser. But Harig has arranged for Project Sole to keep that money and use it to cover the cost of shipping the shoes.

“They’re not giving me anything,” he said.

Harig said that with many negative and sad stories circulating in the media, he saw this shoe drive as a way for he and his family to accomplish something positive.

“I think very simply, if you’re willing to get out there and do the work, the little guy can make the difference,” Harig said. “I think our family here doing this together, I think we can make a difference for quite a few people.”

The drive began this week and is set to last through May 31. Harig is optimistic the drive will be a success, especially since many people around town have been quick to help out.

Drop boxes for the shoes will be set up at Power 96, Nelson’s Marketplace, Adam’s Originals and America’s Best Value Inn. A few more locations are in the works, and people can call Harig at 383-5042.

Harig plans to pick up the shoes at the drop locations every few days, so the drive doesn’t leave a mess.

He may reach out to other groups throughout the county to see if churches or groups, especially in the small towns, which would help spread the word about the drive.

“It’s just getting the information out there that there is a need for this, and you can do something to help,” Harig said.

Through Project Sole, the shoes will likely be sent to the Philippines or Jamaica. Project sole and Harig’s drive will accept all major brands.

The shoes can be well-used and even stinky, but Project Sole will not accept shoes with holes, cleats, sandals or high heels. Shoes with at least half the tread remaining are preferred.

“What a better way to clean out your closet of stuff that you don’t use,” Harig said. “What’s the alternative? That you’re going to send it to the landfill?”