A Des Moines man already facing one charge of first-degree methamphetamine sales is now facing a second charge after he allegedly sold 2 ounces of the drug to an undercover agent at the end of February.

The sale reportedly took place in the Trail’s Travel Center parking lot. The drugs sold for $3,600. 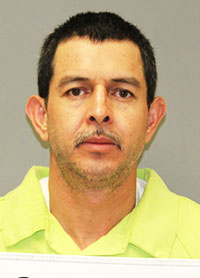 According to court documents, Desantiago was arrested after the sale and reportedly told authorities he had gotten the meth from a man in a bar in Des Moines, but he would not describe the person or provide contact information.

In that case, Desantiago allegedly sold 28 grams of meth for $1,800. The undercover agent asked Desantiago if he would sell a larger amount, to which he agreed.

He reportedly drove a red pickup in both instances.

Desantiago is being held in the Freeborn County jail on a $250,000 conditional bail on each charge.

Conditions include no use or possession of alcohol or controlled substances, complying with random testing, remaining law abiding and signing a waiver of extradition. He is also not allowed to leave the state without prior approval.

The felony charges carry a maximum penalty of 30 years in prison and a $1 million fine.