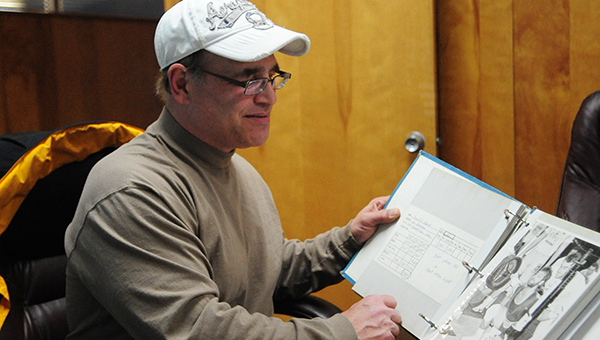 Scott Brua, a longtime powerlifter and body builder, looks through a photo album with photos and notes from his career. –Micah Bader/Albert Lea Tribune

“Scott has iron in his blood, and he’s very competitive,” Scott’s wife, Andrea, said. “He just loves it.”

However, the 1975 graduate of Albert Lea High School and former Mr. Minnesota isn’t only concerned with sculpting his own guns. These days, he’s taken a few students under his wing.

“I’ve never thought about it as mentoring, as much as it’s just what I do,” Scott said. “I just like to help people.”

At the 2013 Minnesota State Powerlifting Championships in early February, Scott and his pupils re-wrote the record books.

Scott set a new record for his age and weight classes with a squat lift of 473.7 pounds. 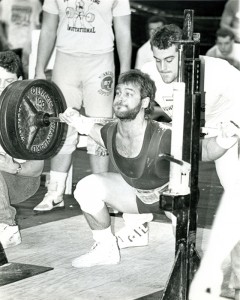 Scott Brua performs the squat lift at a powerlifting competition earlier in his career. Brua’s best for the combination of bench, squat and dead lifts is 1,570 pounds. –Submitted

Holtz set an American record with a dead lift of 501.5 pounds to take first place in the state.

Welch broke the old dead lift record of 470 pounds in his age and weight class. He opened with a lift of 432 pounds. He broke the record on his second set with a 479-pound lift. Then he added to his own record with a 501.5-pound lift on his third set.

“I know I couldn’t have done it without Scott. I’m really thankful for his help,” Welch said. “I was making all these gains in the gym, and everyone there saw. Then, they’d go ask him for help.”

As part of the routine that gave Welch a shot at the dead-lift record, patience during the process was vital, Scott said.

Scott is also working with Ryan Kottschade, a sophomore wrestler from Plainview-Elgin-Millville.

“I still have two more years to work with him. Our goal is to make him state champion,” Scott said. “He’s got a lot of good skills. When his brothers came back from college, they couldn’t believe how he looked. Now, they all want programs.”

Scott’s best for the combined weight of the bench, squat and dead lifts is 1,570 pounds. Some of his highest achievements include finishing third in North American body building, winning Mr. Minnesota and Upper Midwest Minnesota, all in 1992.

Back in high school, Scott was involved in wrestling alongside current Albert Lea head coach Larry Goodnature under the tutelage of current assistant coach Neal Skaar, he said. He also performed the pole vault for the Tigers’ track and field team. After Scott graduated, he wanted to become a body builder, so he looked to Tom Gordon for guidance.

“My mentor was Tom Gordon from Albert Lea,” Scott said. “I looked for whoever lifted the most weights, and he bench-pressed 400 pounds, so I knew he was the guy I needed to talk to.”

Gordon has since passed away, but his kindness left its mark on Scott, Andrea said.

“When you’re at the gym, and people reach out to you, you have the opportunity to help them,” she said. “I encouraged him (Scott) to do it. Because someone did it for him, I say,’Why not give back?’”

Scott has been a member at the YMCA in Red Wing for the past 15 years, where he started a group called the iron heads. He said that powerlifting and body building have many benefits.

“A lot of it is goal-oriented,” he said. “It helps your self-confidence, and it’s improving your body and strength.”