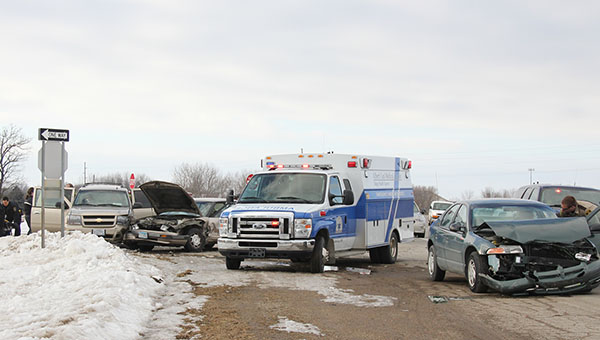 Three people were transported to Albert Lea’s hospital Friday after a three-car crash on U.S. Highway 65 near Interstate 35. 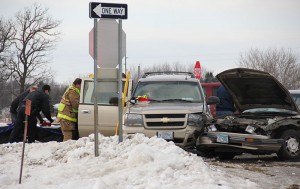 Multiple injuries were reported Friday afternoon after a three-car crash at the intersection of U.S. Highway 65 and 19th Street. — Sarah Stultz/Albert Lea Tribune

Ruth D. Schilling, 87, Richard Hoium, 58, and Gloria Sharp, 62, all of Albert Lea, were treated at Mayo Clinic Health System in Albert Lea, according to the Minnesota State Patrol.

Hoium and Sharp suffered minor injuries, while Schilling’s injuries were not documented.

According to the report, Schilling was driving northbound on Highway 65 in a 1996 Dodge Stratus when she attempted to make a left turn onto Freeborn County Road 84 — also known as 19th Street — and collided with a 1995 Oldsmobile 88 Royale, driven by Hoium and a 2006 Chevrolet Trailblazer, driven by Robert Sharp, 68.

Gloria Sharp was a passenger in the Trailblazer.

Hoium was reportedly driving southbound on Highway 65 at the time of the crash, and the Sharps were stopped at the stop sign on County 84.

The crash took place just a few minutes before 4 p.m. It was across the highway from the on and off ramps to Interstate 35.

The report indicated all four people were wearing their seat belts.

The Albert Lea Police Department assisted at the scene.