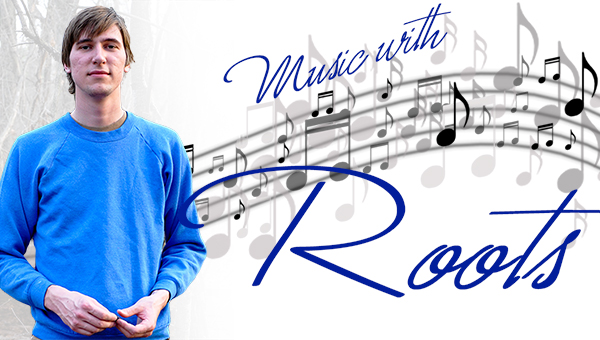 Mike Behrends doesn’t expect writing and performing music to ever be his full-time career, but that doesn’t make it any less worthwhile.

“I pour every bit of creative energy that I can muster up into my music,” he said. “It’s the main reservoir for my thoughts and creativity. I’m always writing songs, reworking songs, thinking about music, making plans.”

Behrends, a 2005 Albert Lea High School graduate, currently writes advertisements for Target inHouse in downtown Minneapolis, but one of his passions is music.

“That’s what I do to make money, then I play music to lose all the money that I make,” he said.

While being a musician can be challenging, stressful and expensive at times, Behrends describes it as a rewarding venture that’s worth the effort.

“It’s like an itch that can’t ever get scratched entirely — I can’t leave it alone,” he said.

While Behrends started playing guitar around seventh-grade in Albert Lea, his music career took off when he attended the University of Minnesota, Duluth, and the city’s vibrant bluegrass, folk and Americana scene piqued Behrends’ interest in music.

“I felt like I was just kind of playing all these different types of music, but once I got to Duluth and got immersed in the scene, I was like, ‘Yep, this is the kind of music that I want to play,” he said.

In Duluth, Behrends’ perspective on music changed. He’d attended concerts at large Twin Cities venues in high school, but the musicians would be ushered quickly off stage after performing. That disconnect faded away in Duluth, where performers at bars, clubs and coffee shops would often mingle with the crowd after a show.

“I sort of realized that was just a person up there on stage,” Behrends said. 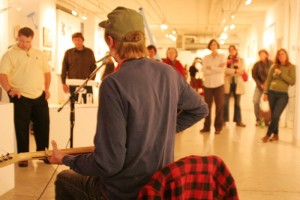 Mike Behrends performs at an art gallery in Madison, Wis. Behrends is a 2005 Albert Lea High School graduate and still has family in town.

With an active and accessible music scene, Behrends gained the confidence to be able to perform on his own.

Behrends performed his first show at Amazing Grace Bakery & Cafe around 2007. It was a short, four-song set, but Behrends was hooked.

“I’m pretty sure nobody was listening or anything,” he said. “But after that, I just tried booking as many shows as possible anywhere and everywhere that would have me.”

Initially, Behrends’ style was what he called a “pale imitation” of the folk and bluegrass he heard in Duluth.

“I think when I was in Duluth I was just really hungry and wanted to play music really bad,” Behrends said. “Those first few shows in Duluth, I don’t even know what songs I was playing. They were probably so bad.”

After his junior year, Behrends transferred from Duluth to Edgewood College in Madison, Wis., where the music scene was more based in indie.

Behrends started playing as The Gentlemen Trailblazers with Lance Owens, a bassist and keyboardist, and Mike Grunder, a drummer in Madison.

He still plays with the two when he visits Madison and said there will always be a kinship there.

“We don’t even need to play music, but we’ll always be a band,” he said.

By playing with new musicians and writing more songs, Behrends gained a better grasp of his music. He now describes his style as a blend of Americana and indie-rock and said he has a better idea of what he wants to do with a song.

After he graduated, Behrends moved to Minneapolis, where there’s an active music scene.

“There’s everything up here; it’s insane,” he said. “It’s a giant music scene.”

While it can be harder to be noticed with many bands in Minneapolis, Behrends noted said it has been motivating.

“I think moving to Minneapolis and being a part of the music scene up here — or at least trying to be — has made me work hard or just continue to be hungry,” he said.

While Behrends started playing music after he moved out of Albert Lea, his music still has a connection to his hometown.

Behrends said his music is almost always a collaborative effort with rotating cast of friends, many from Albert Lea. Moving to Minneapolis put Behrends in closer proximity with many of these friends.

Other ALHS graduates like Jon Klocek, Eric Drommerhausen, Matt Wulff and Adam Schultz performed in their own band, Fever in the Ox, for many years in the Twin Cities, and Behrends often played with or opened for them.

Now, Behrends routinely performs and records with these friends, and Behrends said he feels fortunate to have close friends who are great musicians.

“It’s fun to make music with your friends,” he said.

Drommerhausen and Jordan Skophammer both have a background in recording music, so they helped him record his album “Lonesome for Handsome.” The album was recorded partially with The Gentlemen Trailblazers in Madison and partially with friends originally from Albert Lea after he moved to Minneapolis.

When it comes to performing, Behrends said it really depends on who’s available. One show may only feature Behrends singing and playing guitar, while the next will feature a full band.

After releasing a few CDs, Behrends is working on a two-song, 7-inch vinyl that will likely come out in May. The record will feature duets with Cecelia Erholtz, who plays in the band Chants & Seas. The record will also feature Drommerhausen and Wulff playing with Behrends, and Skophammer will record the release.

“I’m saying goodbye to CDs, and I’m going to start putting stuff out on vinyl until I can’t afford to anymore,” Behrends said.

Now that Behrends is playing and performing with a full band, he’s thought about performing under a new band name, rather than his own name. He’s flirting with the name Bear, noting that he likes the woodsy, northern feel of the name.

While Behrends doesn’t expect music to ever become a full-time career, he said it’s something he’ll always enjoy doing.

“I would like to just keep plugging away at it, and if I can make some little tiny name for myself while I’m doing it, cool. If not, it’s fun to go play,” he said.

If he can play shows and have one person come up to him afterward and say, “Hey, I like that one song,” Behrends will be happy.

“That’s enough to make it rewarding,” he said.