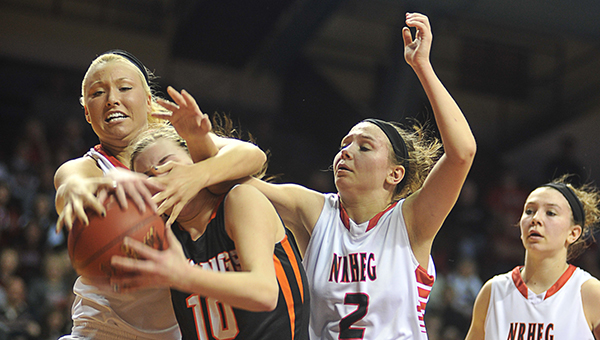 MINNEAPOLIS — The New Richland-Hartland-Ellendale Geneva girls’ basketball team broke a halftime tie by outscoring Pelican Rapids by 13 points in the second half to earn a 62-49 win in the Class AA State Quarterfinals on Wednesday.

“It’s huge to get that first win,” NRHEG head coach John Schultz said. “Now, you know you’re in it for the duration.” 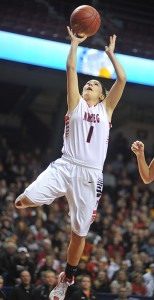 New Richland-Hartland-Ellendale-Geneva’s Maddie Wagner gets a putback in the first half against Pelican Rapids in the quarterfinals of the Class AA Minnesota State Girls’ Basketball Tournament Wednesday night in Williams Arena. Eric Johnson/Albert Lea Tribune.

Pelican Rapids scored the first points of the game on a 3-pointer by Madison Korf.

NRHEG bounced back to take a 4-3 lead on a steal and layup by Carlie Wagner.

However, the Vikings held the Panthers scoreless for the next two-and-a-half minutes to build an 8-4 lead at the 12-minute mark.

After a 3-pointer by NRHEG’s Jade Schultz, a put-back by Maddie Wagner gave the Panthers their biggest lead of the first half (17-12).

Pelican Rapids battled back to take a 23-22 lead on a 3-pointer by Sommer Haugrud, but Maddie answered from downtown on the Panthers’ ensuring possession.

The Vikings hit a buzzer-beater to head into the locker room tied at 25.

To start the second half, NRHEG scored six unanswered points.

Pelican Rapids cut its deficit to one point (33-32) with another 3-pointer by Korf. 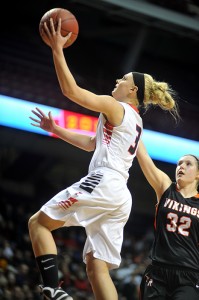 Then, the Vikings took a 35-34 lead on a three-pointer by Haugrud, which was Pelican Rapids’ only lead of the second half.

The Panthers took took the lead and maintained a small advantage until the five-minute mark, where NRHEG scored on three fast-break layups. Carlie pushed the Panthers’ lead to 10 points on an outlet pass from Jade.

“In the second half, we got a little butt-kicking in and played like ourselves,” Jade said.

Carlie led all scorers with 31 points on 12-of-28 shooting. She also led the Panthers with four assists. Maddie was one rebound away from a double-double with 12 points and nine boards. Jade added 11 points and eight rebounds.

However, the Panthers made up for shooting by playing aggressive defense. NRHEG scored 22 points by forcing 27 turnovers, while Pelican Rapids only forced 10 turnovers, which translated into five points.

The Panthers also out-rebounded the Vikings 42-38.

“Washburn won the other game, so they should be a good team to play,” Jade said. “Now we’ve got two games, and we’re hoping for good things.” 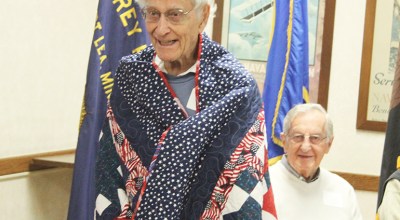