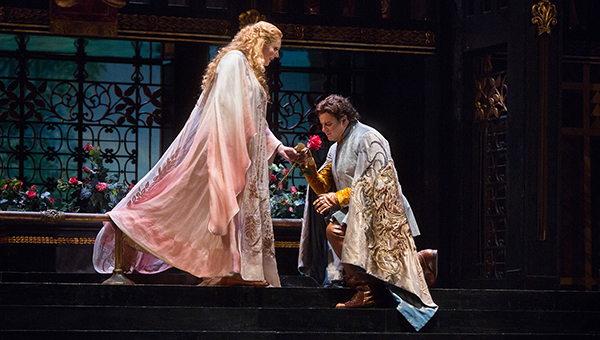 The entertainment of the Big Apple is coming directly to Albert Lea this weekend.

The opera is the 11th opera this season shown at the Performing Arts Center through New York City’s Metropolitan Opera.

“I think it’s a very unique opportunity,” said Eileen Nelson Ness, who helped organize the Met: Live in HD at the theater. “I think what people don’t realize is the Met does these transmissions in 62 countries.”

The Riccardo Zandonai opera tells the story of star-crossed, doomed lovers and is based on Dante’s “Inferno.” The story is centered on a brutal husband and his beautiful wife who falls in love with the husband’s brother. 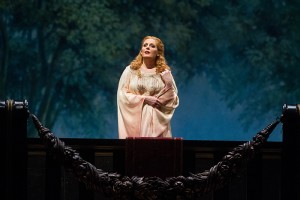 Eva-Maria Westbroek performs the title role of Zandonai’s “Francesca da Rimini.” Local residents will be able to see the New York Metropolitan Opera’s performance through the Met: Live in HD at the Marion Ross Performing Arts Center at 11 a.m. Saturday.

This opera returns to the Met in a rare revival, as it’s the first time the company has staged the work in more than 25 years. The performance features a grand set, the beautiful costumes and appealing music.

This production is set in Renaissance Italy and will star Dutch soprano Eva-Maria Westbroek and Italian tenor Marcello Giordani as Francesca and Paolo, the star-crossed lovers whose romance is doomed. Marco Armiliato conducts a cast that also includes the American baritone Mark Delavan as Gianciotto, Francesca’s brutal husband, and American tenor Robert Brubaker as the wicked Malatestino.

The performance will be sung in Italian with English subtitles, and it runs about 213 minutes with three intermissions. During the intermissions, Met star Sondra Radvanovsky will interview members of the cast and crew.

Nelson Ness said the intermission interviews also allow people to see what’s going on behind the scenes to set up for the next act.

Coffee and cookies from Prairie Wind Coffee will be available for purchase during the breaks.

The 12th and final opera of the season, “Giulio Cesare” by Handel, will be shown at the Performing Arts Center at 11 a.m. April 27. The next season will begin Oct. 5 and will include 10 operas shown through May.

So far, the theater has averaged about 30 people per performance and has topped out around 85.

“I think considering that this is our first season, I think our attendance has been good,” Nelson Ness said, adding theater officials are working to get the word out to people who may not know about the viewings.

By being broadcast to 62 countries, the Met Live brings opera to more than 300,000, many of which wouldn’t have such opportunities to see operas.

“I think it’s a wonderful opportunity to bring opera to different parts of the world,” Nelson Ness said.

A a pre-performance discussion called “Meet the Met” will be at 12:15 p.m. Friday at Prairie Wind Coffee. The half-hour discussion covers the history of the opera, the opera singers, and the synopsis.

Albert Lea Civic Music and Albert Lea Community Theatre has partnered with The Metropolitan Opera of New York City to bring world-class opera to the Albert Lea area. A 16-foot-wide screen, projector and satellites have been installed at the Ross Center.

Tickets for the show are $20 or $18 for season ticket holders.

• Celtic folk group Lehto & Wright will perform at the Lighthouse Event Center at 7:30 p.m. Tickets are $15 in advance and $20 at the door. Tickets are available at Marshall Street Music, Stadheim Jewelers and Hy-Vee.

• The Albert Lea Family Y will host an open house from 9 a.m. to noon. In the gym, there will be kids games, face painting, community vendors, equipment demonstrations and body fat analysis. There will also be fitness activities in the aerobics studio and cycling center. The pool will have a lap swim from 8 a.m. until noon and an open swim from noon to 4 p.m. Both are open to non-members. Building tours will be available, and visitors can sign up for a raffle. Prizes include free fitness/cycling classes, personal training sessions, swim lessons and youth sport registrations. Prizes are available to members and non-members.

• Albert Lea High School Principal Jim Wagner will be in action as part of the Tiger Nation Takedown, at 7 p.m. (doors open 6 p.m.) at the high school. The even will feature wrestlers from the American Wrestling Federation. Tickets are $10 for adults, $5 for for students and children 10 and under get in for free. Proceeds go to the Albert Lea High School Fitness Center.