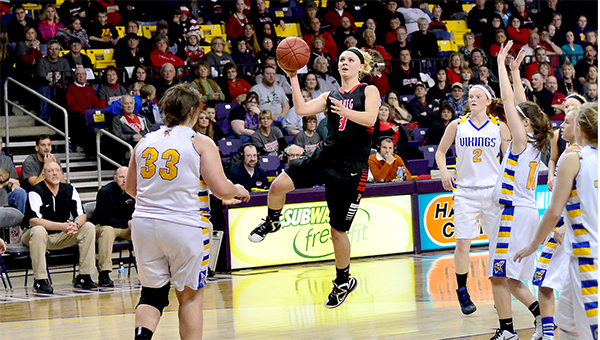 Carlie Wagner gets an open look at the basket against Hayfield during section play at the Minnesota State-Mankato University on Wednesday. Wagner led the Panthers in scoring with 19 points, while Jade Schultz added a double-double with 14 points and 14 rebounds. — Buck Monson/Albert Lea Tribune

NRHEG is one more win from the state tourney

MANKATO — The New Richland-Hartland-Ellendale-Geneva girls’ basketball team (27-1) took to the court against Hayfield (19-9) on Wednesday night at the Taylor Center located on the Minnesota State-Mankato campus.

The score was even most of the game, until about five minutes to go, when Carlie Wagner let loose and scored 10 straight points to give the Panthers a 58-48 win.

“It makes us realize how much we rely on her,” coach John Schultz said. “She had a cold night, but she came through at the end when we needed her to.”

Wagner and the Panthers struggled from the start, even though they were the first to light up the scoreboard. They took a 2-0 lead over Hayfield. Hayfield responded by hitting a few 3-pointers, while NRHEG struggled on offense. At the 9:05 mark in the first half, Hayfield had a 17-14 lead and led by as many as six points during that stretch. 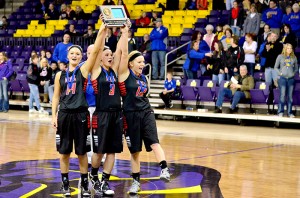 “Our half-court offense and even our transition offense just wasn’t the same tonight,” Schultz said. “We didn’t shoot well as a team, we didn’t get a lot of second shots as a team. Just things that weren’t typical of us that maybe Hayfield brought out.”

NRHEG would respond with seven unanswered points to take a 21-17 lead. At the time, Wagner was struggling and Jade Schultz stepped in and picked up the slack scoring eight points during that span, including the team’s only 3-pointer.

The two teams would battle back and forth for the remaining minutes of the first half with Hayfield going into the break with a 28-26 lead over the struggling Panthers.

According to Coach Schultz, this was the first time that they have trailed going into the half all year.

“I told them, you got to gut it out and hang in there,” he said. “The biggest thing is that Hayfield made us do things that we’re not used to doing. You got to go to the hole.”

The second half went similar to the first half. The Panthers struggled and the Vikings were playing solid defense and preventing Wagner from getting good looks at the basket. Neither team could muster a run of any kind, trading baskets back and forth throughout the second half. With about six minutes to go in the game, it looked as if the Vikings had the momentum and the play to upset the Panthers even though the score was only 46-43.

Things changed in a hurry. Wagner hadn’t given up and ignited a spark in the Panthers as she went on an eight-point run herself, giving the Panthers a 53-46 lead with less than a minute to go. After an exchange of free throws from each team, the final score was 58-48.

“We pulled away when we got a little less structured with our offense,” coach Schultz said. “That last five minutes, we weren’t running one. I told them to just go to the part of the floor that you think you can get the ball. Very unstructured offensively towards the end. We were trying to pick off the defender on Carlie and create some penetration with her.”

The Panthers (28-1) secured the 2A-South Sub-Section Championship and will face Saint Peter (21-5) on Friday at UM-Mankato at 8 p.m. Friday. The winner goes to the state tournment.

“I know that we’ve seen St. Peter a number of times during the summer,” coach Schultz said. “We have to work on our offense, move our players around a little more. The kids learned a lot about their character and a lot about how they can fight to win. This probably helped us out a lot.”