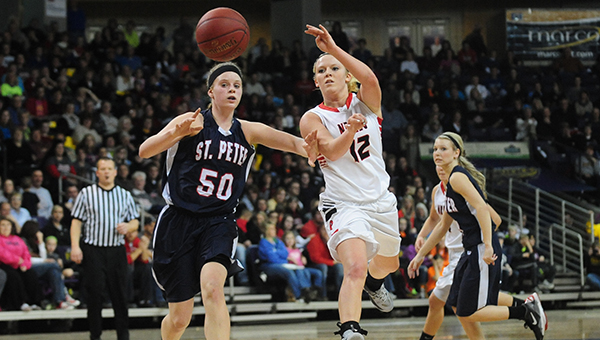 Jade Schultz of New Richland-Hartland-Ellendale-Geneva passes the ball during the Panthers’ 2AA Sectional win over St. Peter. After Raelin Schue was lost for the season with an injury, Schultz was the second Panther starter who was unable to play in the state championship game. However, NRHEG fought through adversity to win the title. — Micah Bader/Albert Lea Tribune

MINNEAPOLIS — The New Richland-Hartland-Ellendale-Geneva girls’ basketball team set numerous individual records during its state championship run, but perhaps the most impressive stat was how the Panthers were down two starters and still won the title.

On Jan. 18, NRHEG took down Blooming Prairie 79-52 on the road to improve to 15-1. However, the Panthers lost senior forward Raelin Schue for the season with an ACL injury.

“She started for us two years ago, and has been around ever since,” NRHEG head coach John Schultz said. “She gave us a lot of rebounds and a good post presence.”

The final game in which Schue accumulated stats this year was against the Awesome Blossoms, where she scored eight points and helped the Panthers out-rebound Blooming Prairie 37-24.

Fast-forward to March 15. NRHEG had amassed a 30-1 record and qualified for the semifinal round of the state tournament. About two minutes into the game, guard Jade Schultz suffered a dislocated kneecap and did not return.

Along with breaking the 1,000 career-point barrier as a junior on Feb. 25, she was the Panthers’ leading rebounder. She was second in steals, second in assists and the second-leading scorer for the third straight year.

“She means a lot to us,” coach Schultz said. “Our physicalness comes from her. She’s our toughest kid and our strongest kid.”

Stepping up to the challenge

Without Schue and Schultz, the rest of the Panthers had to rise to the occasion in the title game.

“I knew it was going to be a challenge,” junior forward Hannah Lundberg said. “She (Schultz) is a huge part of our basketball team, and it’s always wonderful to have her with shooting and rebounding.”

The Panthers found a way to out-rebound Braham 50-40 in the championship. Senior center Paige Overgaard and junior guard Carlie Wagner tied with a game-high 12 rebounds. Lundberg, Katie Cole, Maddie and Marnie Wagner and Abby Crabtree combined for the rest of NRHEG’s boards.

Along with excelling on the glass, the Panthers also played well from the field. Carlie set five individual state records and tied one.

In addition, she broke some long-standing state records.

In 1982, Lester Prairie’s Kay Konerza set the record for most field goal attempts with 40. Carlie had 43.

In 1980, Janet Karovenen of New York Mills set the record for field-goal attempts in a three-game tournament with 83. Carlie had 110.

In 1981, Albany’s Kelly Skalicky set the record for field goals made in a three-game tournament with 47. Carlie had 48.

Also in 1981, Skalicky set the record for field goals made in a state tournament game with 21. Carlie tied the mark with 21 of her own.

“I’m happy. It’s great. But, I don’t take it upon myself. It’s a team thing,” Carlie said. “I couldn’t have done it without my teammates. So, it’s like our record.”