One lieutenant with the Albert Lea Police Department and one fire captain with the Fire Department have received promotions.

Police Lt. J.D. Carlson is now the senior lieutenant in the department, according to Albert Lea Public Safety Director Dwaine Winkels. Fire Capt. Mark Roche will retain his title but will now also be the lead housing inspector. 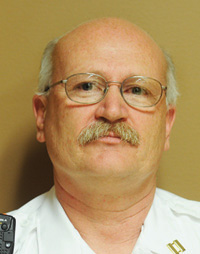 “I think they both have great experience here in the city,” said Albert Lea City Manager Chad Adams. “We’re looking forward to their leadership in both the departments and in advancing the organization.”

Both will receive a stipend of $200 a month for the promotions.

The changes come after Winkels was appointed in July to oversee both departments. He had formerly been police chief and also had filled in as interim fire chief following the retirement of Fire Chief Paul Stieler.

After a review of the department, officials decided to have Winkels permanently oversee both departments instead of having separate police and fire chiefs. Though the departments have the same leader, they run separately.

Winkels said with the changes, police Lt. J.D. Carlson is now the senior lieutenant in the department, which means he will be second in command.

“If I’m not there, it gives him the authority to make decisions on day-to-day operations,” Winkels said.

He said Carlson will head up an evaluation of the department’s community policing efforts to rejuvenate the officers about the approach to policing.

Roche will set up and oversee a schedule for rental housing inspections, which are conducted by firefighters.