Riverland hunts for its new president

By Trey Mewes and Kevin Coss

It’s not election season, but three candidates are vying for the presidency — at Riverland Community College, that is.

Between Feb. 21 and 25, the candidates spoke at forums on the Austin, Albert Lea and Owatonna Riverland campuses, giving a personal statement and answering questions audience members and those streaming the talk online.

The MnSCU Board of Trustees is expected to act on Chancellor Steven Rosenstone’s recommendation on a final candidate at its March 20 meeting. The new president would likely begin in July 2013. 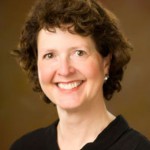 When it comes to interview preparation, chances are Mary Davenport didn’t have to study up too much on Riverland.

Davenport, interim vice president of academic and student affairs at Riverland since 2012, said one of her top strengths was having experience with the larger college system that governs Riverland. Davenport has been to every campus in Minnesota State Colleges and Universities and knows where to go for consultation, advice and best practices.

“I know how to navigate MnSCU,” she said.

If she were to take the role of president, Davenport said the first step would be to reaffirm the college’s mission, vision and values. Her other goals included using more predictive modeling to make future changes.

“We can be better users of data,” she said, suggesting Riverland take advantage of analytics to discover what’s working and how to identify its goals. “We need to get a good handle on what we have and what we need.”

She also pointed to a drop in student enrollment as a concern for the college.

“It’s declining; we need to turn that around,” she said.

One way for the college to reach its goals is to promote itself more, Davenport said, which should include greater use of social networking and keeping in touch with alumni.

Diversity was a concern for many of those attending the forums, and Davenport said she has had experience with the subject at previous institutions. At St. Paul College, where she was the interim dean of health and service programs and helped orient the new president, Davenport learned to address diversity issues on a campus was more than 50 percent diverse.

She highlighted the need to help immigrants new to the U.S. learn how to find and keep a job in their new homes.

Davenport emphasized she did not view the position as a stepping stone to her next job, and instead suggested a community college needs to keep a president for a number of years to allow growth to happen.

“I believe that a good president ought to stay for at least 5-10 years,” Davenport said. “I’m committed to that.”

In her closing address, Davenport stressed her existing Riverland experience would make her the best candidate for the job.

“I think I have the right match of skills and experience for Riverland,” she said. “I’d come here with my sleeves rolled up and my running shoes already broken in.” 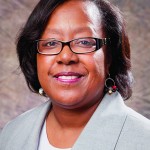 Annette Parker may not have prior experience with MnSCU, but she has years of practice in a similar system.

Parker has worked since 2007 as system director of workforce education at the Kentucky Community and Technical College System, which was developed in 1997, around the same time MnSCU came into play. She worked for the KCTCS chancellor in its central office.

“I think I have an understanding of how you work with the college,” she said.

Parker has also served as the system executive director at the National Center of Excellence in Advanced Automotive Manufacturing.

“I am a strategic thinker,” she said, adding what really needs to happen at Riverland is a “coming together around a shared vision.”

Those attending Parker’s portion of the presidential forums placed diversity as a high priority. Parker said she has had experience handling diversity matters before.

Riverland needs to look at ways to increase access and success to international students who wish to attend, she said, and also to integrate cultural and awareness events.

“I would like for our faculty, staff and students to have those opportunities,” she said.

Parker also stressed the need for colleges to work with K12 educators and community partners to ensure students are college-ready by the time they graduate from high school.

Online instruction is an evolving part of higher education, and Parker said it was important to realize it is here to stay. That said, many problems remain, including issues for students who do not have reliable Internet access in their homes. It’s also important to consider the effect on educators.

“It takes more time for instructors to prep for online,” she said.

While she has not yet considered how long she would stay at Riverland if hired as president, Parker said her goal is to leave the college better than she found it.

Part of her idea for the college depends on Riverland’s outreach efforts. The college needs to evaluate how well it penetrates into its surroundings, she said, to understand how to partner with local community groups and businesses to strengthen Riverland.

“We need to do an environmental scan in our community,” she said.

In the bigger picture, a widespread four-year degree mentality is hurting community colleges, even though they are ideal for students in the middle class looking to learn a trade, Parker said. Changing that mentality and emphasizing the usefulness of an institution like Riverland is key.

“That’s going to get us out of the financial crisis right now,” she said. “Not all four-year degrees pay a self-sustaining wage.” 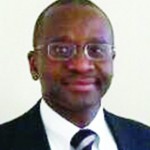 The last thing you do with your hands is your legacy.

That’s what Dr. Adenuga Atewologun believes. And it’s even what the Nigerian-born educator’s name means.

“That has been something that is driving me,” Atewologun told the audience gathered Monday inside the auditorium. “I want to do much in terms of working with my hands, and leaving a legacy, wherever I am.”

Atewologun has served as vice president of academic affairs and dean of faculty at Prairie State College since 2009. He was an American Council on Education fellow at Bellevue College in Washington from 2008 to 2009, and served in various administrative roles at the College of DuPage from 1997 to 2008. He came to the U.S. in 1983, earning a master’s and doctorate degree in agricultural engineering from the University of Illinois at Urbana-Champaign before beginning his teaching career in 1990.

At first Atewologun dismissed applying for the Riverland presidency, but the more he looked at Riverland’s programs, the more he grew interested. He cited his expertise in funding and creating partnerships with other organizations as benefits he would bring to the college.

Atewologun would take his time in making big decisions for the school, however. While several people asked how he would approach things like clearing up Riverland’s organizational structure and encouraging diversity within the college and community, Atewologun made sure to point out he would rely on the college officials already here and would learn as much as he could about the college before making impactful changes.

“It would be presumptuous of me to just come here, and start changing the structure,” he said. “I would first want to look at issues, find out why it’s not working — if it’s not working. If it is working, so we keep that.”

When it comes to diversity, Atewologun cites his experience creating ways to integrate students of color within the college, including a conference for black students to network with other professionals — a key reason why Atewologun said students of color aren’t having as easy a time finding jobs in this economy.

“It’s networking, having a network,” he said.

While Atewologun wasn’t specific as to how long he would stay at Riverland, he cited his 14 years at College of Dupage as an indicator of his willingness to stay with a school. Above all, he said, his wide academic experience and willingness to listen would serve as a benefit to guiding Riverland into the future.

“I like to entertain the contrarian view,” he said. “It’s very important to know there are some views out there. It may be a minority, it may be contrarian, but at least it helps you say, ‘I’ve got to look at this one more time,’ before you commit too much resources or you go down a path that’s too difficult to retrace your steps.”