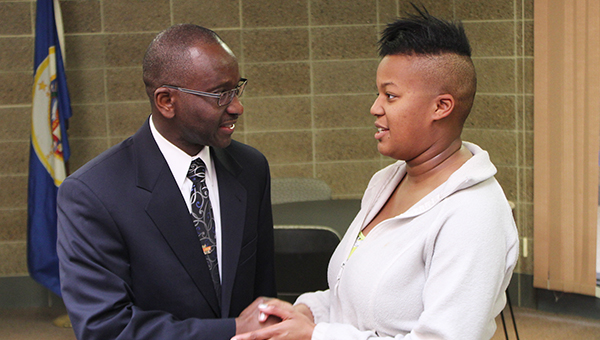 Focusing on strengths and connecting with the communities are ways to take Riverland Community College to the next level of excellence, said its new president Thursday morning. For Albert Lea, that means building its automotive and technology programs.

Workers at Riverland Community College’s campus in Albert Lea met their new leader Thursday morning. Adenuga Atewologun was appointed as the new president March 20 by the Minnesota State Colleges and Universities board of trustees. On Thursday, he visited the three Riverland campuses, starting in Albert Lea before heading to Austin and Owatonna.

“Thank you for welcoming me with open arms to the state of Minnesota,” Atewologun said. 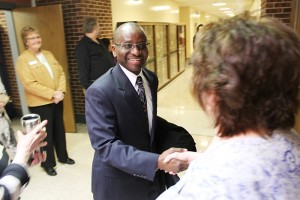 One aspect of Albert Lea’s programming that he mentioned as a strength was “mechatronics,” a combination of the words mechanics and electronics. In the modern sense, the term connotes mechanical and electrical engineering hand in hand with computer capabilities.

Atewologun said he sees the Owatonna campus as a technology and business center and the Austin campus as health care training, liberal arts and administration.

At the Albert Lea meeting, Atewologun cleared up questions on pronouncing his name. He said people call him “Dr. Nuga,” a shortened version of his first name. He comes to Riverland from Prairie State College in Chicago Heights, Ill., where he was the vice president for academic affairs and dean of faculty.

“I see today as a day of reflection,” he told the Albert Lea audience of about 25 people in the Skylight Room.

He said his values are excellence, strong work ethic, integrity, honesty and transparency.

“We will work together to be where we want to be as soon as possible,��� Atewologun said.

He intends to look back at the past not out of regret but to understand where Riverland is and will look ahead to find where Riverland needs to be, he said. He said determining strengths is important in planning.

He also said the news media can be a strong ally for Riverland.

MnSCU trustee Duane Benson, a former state senator and a former NFL linebacker who now serves on the Minnesota Sports Facilities Authority, introduced Atewologun. He said “Dr. Nuga” helped make Prairie State College the first community college in Illinois to guarantee all credits will transfer to other Illinois colleges and universities. He said Atewologun has a distinct ability to forge partnerships within communities. 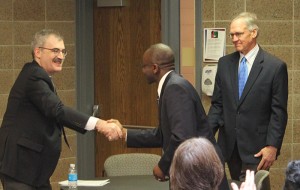 Atewologun said he and his wife, Murielle, moved to the United States from Nigeria with the intent to stay for three years. That was 28 years ago.

Benson read some comments from people who had been part of the interview forums:

• “His enthusiasm is contagious.”

• “Approachable, humble and a sense of humor.”

• “Input from all stakeholders.”

• “Passionate about excellence and engaging all shareholders.”

MnSCU Chancellor Steven Rosenstone said there were 50 applicants and three finalists for the job. He, too, said Atewologun is known as an innovative civic leader. He said he will be a contributor to higher education in Minnesota.

In February, Hanson was named the next president of Anoka-Ramsey Community College and Anoka Technical College. He starts there July 1.