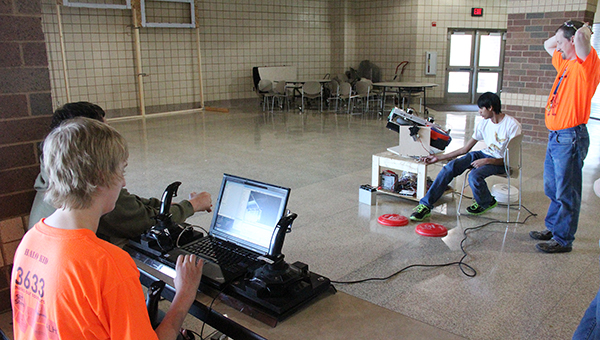 The Albert Lea robotics team, Catalyst, works on their technique at a recent practice. The team will compete in Minneapolis starting Thursday. –Kelli Lageson/Albert Lea Tribune

Catalyst, the Albert Lea robotics team, is gearing up for its first competition this year.

The regional competition starts Thursday at the University of Minnesota’s Mariucci Arena in Minneapolis. This will be the third year the Albert Lea team has competed at the FIRST Robotics competition. FIRST stands for For Inspiration and Recognition of Science and Technology. Team captain and Albert Lea High School senior Mark McGivern has been on the team all three years and said this year’s challenge was the hardest he has seen.

Teams competing have to create a robot to do specific tasks set each year by FIRST. This year, robots must be able to shoot Frisbees at targets and/or be able to climb a pyramid. There are points for climbing the pyramid and points for each Frisbee that hits the target. Head coach Ken Fiscus said the challenge of deciding to create a robot that can do everything, or just one thing really well, is a lot like real-world engineering problems.

“It was a tough choice what to do, but you can’t do it all,” Fiscus said.

The Albert Lea team decided they would be able to make more points if they focused their efforts on being the best at shooting Frisbees. The mechanics of making a robot climb a pyramid didn’t seem worth it for the points that were available.

“We’re going to go full shooting,” McGivern said. “This is definitely the hardest challenge we’ve had yet.”

But hopefully they’ll receive help from other schools. The competition is set up so that no single team can win the whole event. Every team is part of a three-team alliance, so Albert Lea will find out who they’re teamed with and those teams will work together to win as an alliance.

“Part of FIRST is gracious professionalism, so no one robot can win it all,” McGivern said.

The team, under guidance from Fiscus and assistant coaches Spencer Elvebak and Wendy Keszler, had just six and a half weeks to build the robot. Not only did they build a physical robot that can shoot Frisbees at a set target, other team members created programming so team members can operate the robot from the sidelines.

“This is only the third year, and we’re immensely proud of all of our robots,” McGivern said.

“We’re looking for more businesses to sponsor us in the future, too,” McGivern said. 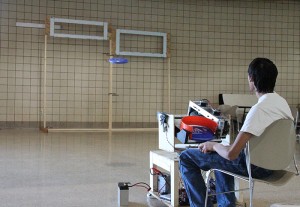 Robotics team member Rigel Fiscus watches as a Frisbee flies toward a target at a recent practice.

The team members of Catalyst affectionately named their robot Hex and said they’re attached to it after spending so many hours working on it. They also incorporated a hexagon into the design, since that shape is part of their team’s logo.

The competition can be viewed live online at www.thebluealliance.com. Then click on “Minnesota North Star Regional” and the “Watch Now” button. Competitions are Thursday through Saturday. The Albert Lea team will also post updates to their Twitter account @3633team and on their Facebook page “First Robotics 3633.”