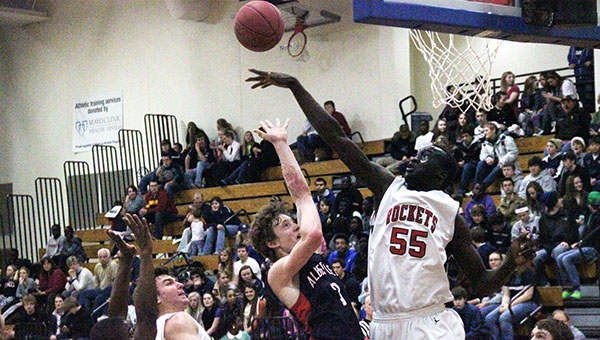 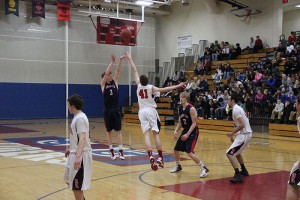 Dylan See-Rockers shoots and makes a 3-pointer in the first half of a game Friday against Rochester John Marshall. — Tim Engstrom/Albert Lea Tribune

The Tigers captured the first two points for the night, but then the Rockets grabbed the lead and held it for most of the night. However, the Tigers got the crowd going when they took the lead again in the second half.

It was the final home game for this year’s seniors.

“We had some great looks tonight offensively,” said Tigers coach Lucas Kreuscher. “I still would like to see us space things out a little better offensively to open up our options. Now we enter the fun part of the season; and we’ll have to play well with whoever we draw the first round.”

They had a Big Nine Conference record of 7-11. The Tigers finished sixth in the 10-team league.

The Tigers will play in the first round of the Section 1AAA tournament on March 6.