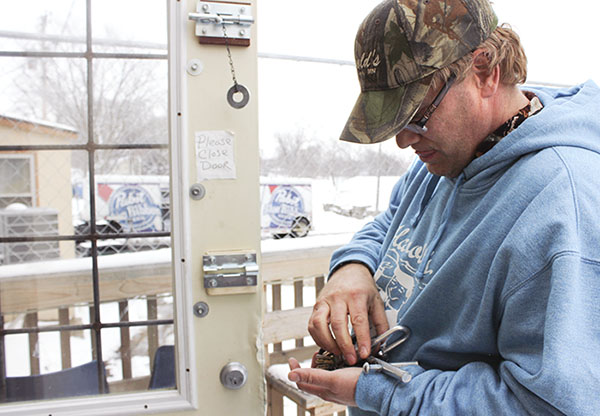 Harold’s Bar owner Todd Haroldson looks over a set of keys Tuesday to three sliding bolt locks installed on the back door of the bar. Haroldson said he installed the locks after someone reportedly broke into the business last month. — Sarah Stultz/Albert Lea Tribune

Albert Lea area deals with a rash of after-hour thefts

It began as a typical day for Harold’s Bar owner Todd Haroldson. 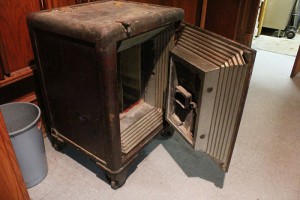 This safe is one of several areas a burglar attempted to break into at the Eagles Club in Albert Lea in February. — Sarah Stultz/Albert Lea Tribune

Walking into the East Main Street bar on the morning of Feb. 14, he quickly found out it would be anything but typical.

That morning, he discovered the business sustained about $8,000 in damages, including damaged doors, $3,100 in stolen lottery tickets and damage to the pull-tab machines.

The burglar reportedly had jumped a fence in the back of the bar sometime overnight and broken in through the back door.

Just two weeks before, someone had hidden inside the bar until after closing and then waited for everyone to leave before damaging the pull-tab machines.

He said the two incidents combined have his bartenders scared. 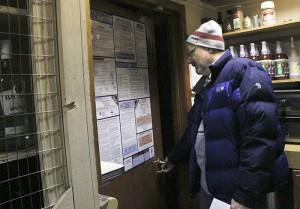 Doug Lind, secretary of the Albert Lea Eagles Club, opens a door that was damaged during a break-in at the building in February. The Eagles Club sustained about $10,000 in damages. — Sarah Stultz/Albert Lea Tribune

“It’s sickening,” said Haroldson. “We’ve been here 53 years, and I’ve never had to deal with anything like this.”

Harold’s Bar is one of more than at least a half dozen burglaries that have been reported in the last six weeks in Freeborn County.

Other break-ins have been reported at the Glenville and Freeborn American Legion posts, the Albert Lea Eagles Club, Lair’s 66 gas station in Emmons and the Shortstop gas station in Glenville.

Though officials do not know if the break-ins are connected, they are advising people to call police if they see anything suspicious.

“If they see people lingering around a building after a business is closed, call,” said Albert Lea Police Department Lt. Jeff Strom. “We’re always available, and we appreciate the phone calls.”

In the meantime, the businesses and service clubs are taking precautions to protect themselves from any future burglaries.

Doug Lind, secretary of the Eagles Club, said his organization has barred its windows, purchased a new safe and is updating its video surveillance.

“Anything with a lock on it was destroyed,” Lind said.

He said the burglar at the Eagles broke in through a window in the women’s bathroom on Feb. 6. 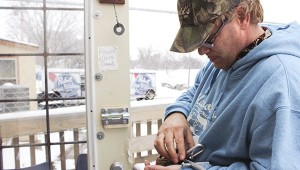 Harold’s Bar owner Todd Haroldson looks over a set of keys Tuesday to three sliding bolt locks installed on the back door of the bar. Haroldson said he installed the locks after someone reportedly broke into the business last month. — Sarah Stultz/Albert Lea Tribune

The organization sustained about $10,000 in damages — broken locks, broken doors and stolen cash. The building was ransacked.

Some of the money taken were donations for the Eagles Club’s heart fund, which goes to support American Heart Month in February, Lind said.

Lind said he was home sleeping when he received a call from one of the organization’s trustees, who was notified that the alarm went off at the building.

He said the police were notified right away, but by that time the burglar had a chance to escape.

Waiting for his insurance to repair his back door, Haroldson has installed three sliding bolt locks to ensure that no one can get in.

He is also installing a new video surveillance system — with a camera pointed at the back door.

He said it was a small price to pay to make sure he and his bartenders feel safe.

If anyone has any information, they can call the Albert Lea Police Department or Freeborn County Sheriff’s Office at 911 for emergencies or 507-377-5205 for non-emergencies.