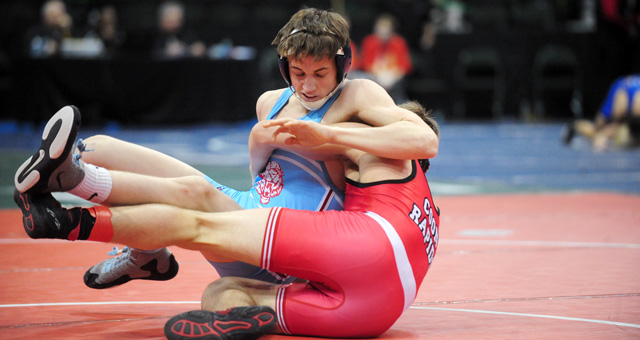 Lucas Hansen wrestles Nate Julkowski of Coon Rapids during the first round of the state wrestling tournament Friday at the Xcel Energy Center. Hansen won the match by a 3-0 decision. –Brandi Hagen/Albert Lea Tribune

ST. PAUL — Three out of seven Albert Lea wrestlers won their first-round matches at the state wrestling meet to qualify for the quarterfinals on Friday.

Trevor Westerlund, in the 113-pound weight class, was the first Albert Lea wrestler to advance. He dominated since the first period. Westerlund led 6-1 at the start of the second period and extended that lead to 15 points (18-3), before pinning Andy Andress of White Bear Lake.

In the quarterfinals, Trevor Westerlund (37-6) will face Maolu Woiwor (39-5). Woiwor pinned his first-round opponent in 5:36.

Lucas Hansen earned Albert Lea’s second win of the day with a 3-0 decision over Nate Julkowski of Coon Rapids.

Hansen (38-4) will wrestle Mitch Bengtson(42-0) in the quarterfinals. Bengtson pinned his first-round opponent in 1:51. 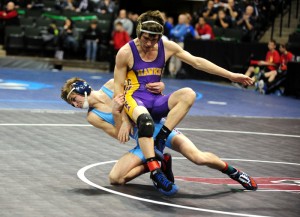 Dakota Wangsness pulls his opponent Trent Butcher of Chaska to the mat in the first round of the state wrestling tournament Friday in St. Paul. –Brandi Hagen/Albert Lea Tribune

Triston Westerlund also earned a win in the opening round. At 182 pounds, he took down Gary Nick of St. Paul Central by major decision, 15-4.

“I didn’t expect to lose,” Westerlund said. “I wanted to get past today only having to do two matches.”

Triston Westerlund (38-5) will face Ricky Briggs (41-3) in the quarterfinals. Briggs pinned Jake Owens of Rogers in one minute in the first round.

All four wrestlers have a chance to work their way back through the bracket with wrestlebacks at 8 p.m. today.