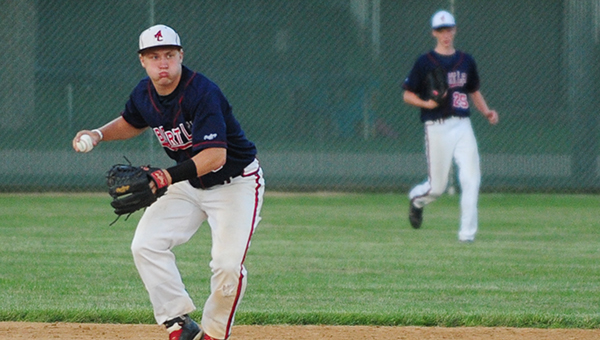 Albert Lea Post 56 shortstop Ethan Abben sets his feet to throw the ball toward first base during the first round of the 2011 District 1 Tournament at Hayek Field. Abben is out for six months with a tear in his throwing shoulder. — File photo

The Albert Lea baseball team, a group that lost only two seniors to graduation, is brimming with excitement.

However, the Tigers have encountered their first obstacle of the season.

The Big Nine Conference’s batting and stolen bases leader is out for the season. Albert Lea shortstop Ethan Abben was informed by Dr. Michael Eckstrom that he sustained a SLAP (Superior Labial tear from Anterior to Posterior) tear to his throwing shoulder, which will require surgery.

He’ll be out of commission for six months. The injury is common in baseball players because of the throwing motion.

“Dr. Eckstrom said that it was probably a small tear that started a couple of years ago, and I played a lot of baseball games,” Abben said. “It was almost one every day, and it got worse and worse.”

Albert Lea head coach Joe Sczublewski said it’s hard on Abben, as it was his last chance to play baseball at the high school level.

“It’s sad to see a senior go out that way. It hurts the team, but it’s terrible for the player,” he said. “He’s spent his whole life playing baseball, and the pinnacle is typically your senior year. Unfortunately, he won’t be able to experience that.”

However, Abben won’t be far from the diamond, or the gym while snow still covers the ground.

“He’ll be helping in a more managerial role and as a friend to the kids,” Sczublewski said.

“I’ll do whatever I can,” Abben said. “I’ll just talk to the kids. If I see them make a mistake, I’ll help them out.”

Rehab from the surgery will not only affect baseball, but it could also impact his football career.

Abben was selected to participate in the Minnesota State All-Star Game at St. Cloud State’s Husky Stadium on June 29 by the coaches in the Big Nine Conference. However, he’ll have to watch the game from the sidelines.

Rochester Community Technical College signed Abben to play football, but his arrival to the field may be delayed.

“I might have to miss two-a-days, and the beginning of the season because of this,” Abben said. “But, I’m not sure. I’m going to go really hard for rehab.”

As for Abben’s short-stop position on the baseball diamond, Coach Sczublewski said he isn’t panicking.