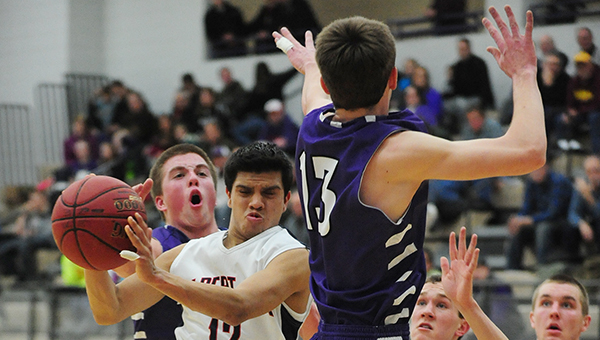 Albert Lea’s senior point guard Jorge Sena dishes the ball out to the wing after making four Red Wing defenders collapse into the lane. Sena led the Tigers with six assists to go along with seven points, two rebounds and three steals. Albert Lea head coach Lucas Kruescher spoke highly of Sena after the game for the toughness and tenacity he has shown on the court. — Micah Bader/Albert Lea Tribune 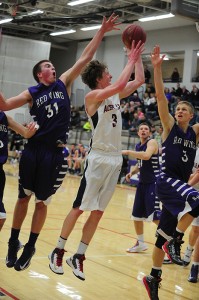 Dylan-See Rockers of Albert Lea drives to the basket at Red Wing. See-Rockers scored a team-high 20 points and hit a 3-pointer to give the Tigers a one-point lead with 30 seconds left in regulation. — Micah Bader/Albert Lea Tribune

The No.3-seed Wingers needed every second to advance past the No.6-seed Tigers 59-56.

The first half was back-and-forth. The biggest lead of the half was five points by Red Wing, which was sliced to two points at halftime by Albert Lea’s prolific transition game.

In the second half, with a steal and outlet pass by Dylan See-Rockers, Goding Wal of Albert Lea tied the game at 33.

However, Red Wing maintained a small lead the rest of the half until the about 1 minute and 20 seconds remained.

Cody Scherff, who led the Tigers on the glass with 11 rebounds, started a run. He hit a jump shot, stole the ball on Red Wing’s next possession and passed the ball to a streaking See-Rockers who finished at the rim to tie the game at 53 with 30 seconds left. 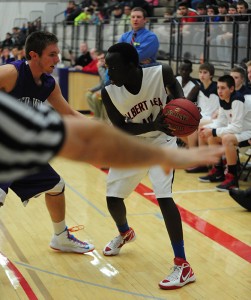 Red Wing answered, but See-Rockers answered back on Albert Lea’s next possession with a 3-pointer to give the Tigers a 56-55 lead.

“We had the momentum until there was three seconds left,” See-Rockers said. “I thought we had ‘em.”

“It was a game of who could hit big shots in the last minute,” Albert Lea head coach Lucas Kreuscher said. “That’s what sectional basketball is all about. Every possession matters.”

Then, disaster struck. Red Wing was fouled in the act of shooting with 3.5 seconds left. The Winger hit both free throws, and Albert Lea turned the ball over on the ensuing in-bounds pass.

The Tigers were forced to foul, and Red Wing made two more free throws with 1.2 seconds left. Albert Lea had one last shot but was unable to convert.

Albert Lea finished the season with a 12-14 overall record.