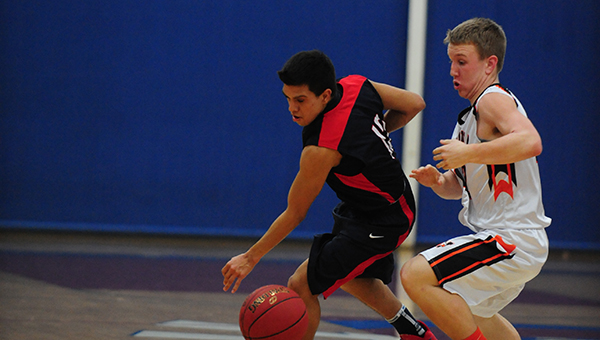 Albert Lea’s Jorge Sena and a Winona defender battle for a loose ball when the two teams met earlier this season. Albert Lea lost the first meeting 59-43, The second meeting went down to the wire, as Winona beat Albert Lea 61-55 on Thursday. — Micah Bader/Albert Lea Tribune

Despite a furious rally by the Albert Lea boys’ basketball team on Thursday, the Tigers fell 61-55 in a Section 1AAA matchup at Winona on Thursday.

Albert Lea trailed by as many as 18 points in the second half, but the Tigers cut the deficit down to one point with about one minute left in regulation.

“You don’t leave much margin for error, when you get down by that many points,” Albert Lea head coach Lucas Kreuscher said. “But, I’m proud of how the guys stuck with it and kept chipping away.”

“Vandenheuvel hit some big shots to get us back into the game,” Kreuscher said. “Goding Wal had his best individual game. He played well inside for us, and he played solid defense.”

With the win, the Winhawks are fourth in the section standings. The top four teams get home-court advantage in the first round of the sectional tournament.

Rochester John Marshall is second in the Big Nine standings with an overall record of 18-6.