Two Tigers are in the hunt for third 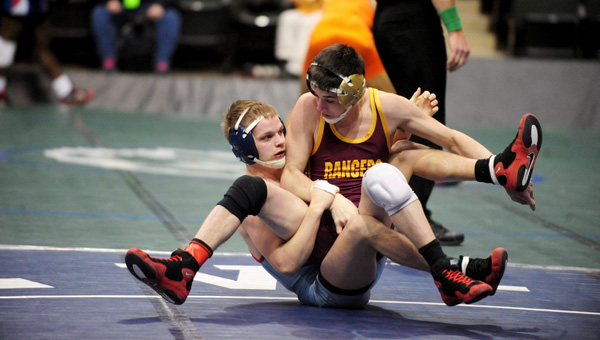 ST. PAUL — Two wrestlers from Albert Lea are still in the hunt for third place after the consolation quarterfinals, also known as the second round of wrestlebacks.

Trevor Westerlund at 113 pounds, and Lucas Hansen at 138 pounds won their matches.

Westerlund earned an 8-3 decision over Luke McCord of Forest Lake. McCord was injured in the first period, while Westerlund led 2-1.

Hansen chose to attack at the right times to build a 6-0 lead with one minute left in the third period. He finished off Phillip Anderson of Rogers with a late takedown to win 8-0.

Hansen and Westerlund are one win away from the match for third place. 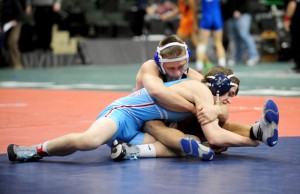 Lucas Hansen won an 8-0 decision over Phillip Anderson of Rogers during the consolation quarterfinals this morning at the Xcel Energy Center in St. Paul. Hansen will wrestle in the consolation semi-finals later today. –Brandi Hagen/Albert Lea Tribune

Also competing in the second round of wrestlebacks were Beau Johnsrud at 106 pounds, Garrett Wangsness at 120 pounds and Dakota Wangsness at 126 pounds.

Johnsrud lost a 4-3 decision after a scoreless first period to Jack Bergeland of Centennial. Garrett Wangsness was pinned by Travis Swanson of Cambridge-Isanti in 1:41. Dakota Wangsness lost an 8-3 decision to Logan Crosby of Bemidji. Dakota trailed 4-0 early, but he cut his deficit in half with a takedown. However, Crosby finished the match on a 4-1 run.