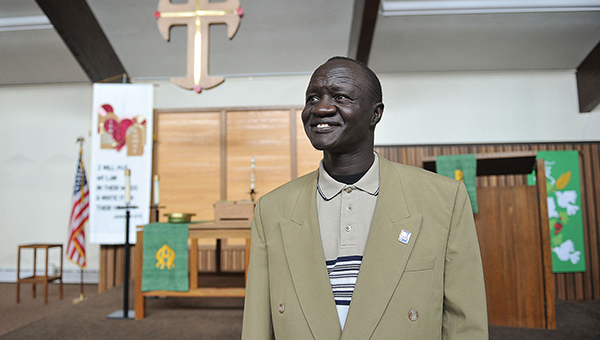 The Rev. Simon Dup of the Sudanese Evangelical Lutheran Mission Church of Southern Minnesota headed to South Sudan this month to help build a school. He raised $9,700 in 2010 to help build the school, but fighting in the Sudan prevented him from getting to the village where the school will be built. –Eric Johnson/Albert Lea Tribune

The Rev. Simon Dup is traveling to South Sudan to finish a mission he started years ago: He’ll see a new school built in southeast Africa, one of many he hopes will sprout up across the new country.

“We try to help our people,” Dup said.

Dup came to the U.S. in 1994, one of many Sudanese refugees from the southern part of the region to escape violence and persecution by Sudanese armies in the north. He came to Albert Lea in 2003 from Des Moines, Iowa, where he started school at a seminary. Dup, who graduated in 2008 and completed ordination in 2009, formed the Sudanese Evangelical Lutheran Mission Church of Southern Minnesota. He leads two Sudanese congregations, one at Zion Lutheran Church in Albert Lea and one at St. John’s Lutheran Church in Austin.

Yet Dup, like many Sudanese refugees, thought of ways to help people back in Sudan who were trapped in the fight between the Sudanese government and its Christian residents. Dup resolved to raise money to build a school, collecting $9,700 in 2010. Dup ran into harsh reality in 2011, however, when he tried to go back to the region: The road needed to get to his small part of southeastern Sudan was closed because of fighting.

“North Sudan tried to destroy anything they could,” Dup said. “So they blew up the way to the place I want to go to build the school.”

South Sudan declared its independence in July 2011, after residents overwhelmingly voted to split the region into its own country. Though the country has made great strides since then — South Sudan is a member of the United Nations and signed the Geneva Convention in July 2012 — its government has yet to centralize enough to offer municipal services U.S. residents have long been accustomed to, such as a country-wide education system.

That’s why Dup planned to go to South Sudan this month. His church still has the money to build a new school, all $9,700 of it.

“This school is not a special school that we have right now,” Dup said, as it’s more important children simply have a place to go and learn.

Dup plans to attempt to get back home either through Sudan or by renting a car in nearby Ethiopia, though he speculates he may have to walk. He and other Sudanese volunteers will only have two months to build before summer rains complicate the process, but Dup is confident he’ll be there for a couple months at most.

“I will stay there until the school is done,” he said.

Interesting fact: Dup got to choose his own birthday. In Sudan, people don’t usually keep track of birthdays or how old they are. That’s why a lot of Sudanese refugees write their birthdays as Jan. 1, and pick a year based on how old they might be. Dup thinks he was born in 1967, and chose April 5 as his birthday.