WELLS — The United South Central school board has approved some of the contracts for the new building and is expecting to deal with many more in coming weeks. 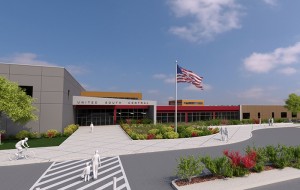 This graphic represents a proposed look for the new United South Central building. The colors and other aspects are subject to change.

The $28 million facility will be built this year and next, with school starting at that site in the fall of 2014. The first round of bids, involving rough work like concrete, earth work and more, were approved at a special meeting in mid-March.

“The board wanted to be sure that they were affording them every opportunity legally possible,” Jensen said.

The district is using construction management company Kraus-Anderson, and Jensen said a perk of using them is that the bids can get split up into many smaller projects. The hope is that local companies can compete for those smaller project bids and be a part of the new school.

A groundbreaking had been set for the board’s April 23 meeting, but Jensen doesn’t expect to have a groundbreaking ceremony until sometime in early May.

Up next is the approval of even more bids. Jensen said there likely will be 43 or 46 contracts for the entire project.

“That’s primarily athletic facilities and things on the grounds other than the school,” Jensen said.

All contracts are expected to be awarded by the end of May. Then a final construction cost will be available. Right now, the board expects the entire project to cost $28.825 million.

Board members are mulling colors for the interior and exterior of the building, as well as other small details. Right now the plan is to have a main entrance for both the high school and elementary. There are no plans to discuss a new name for the building, and Jensen said it most likely it will be called United South Central Schools.

About the new school

A referendum was held Aug. 14, 2012, and the majority of voters were supportive of a new school. The oldest part of the current building was built in 1932, with additions in 1933 and 1961. The current building has a host of plumbing, air quality and size issues. The district has an average of 600 students enrolled each year.

The new building will be 155,000 square feet and is designed by Minneapolis-based architects SGN/Wendel. It will be built on almost 67 acres on the south side of Wells on the western side of Minnesota Highway 22. The new facility will have the capacity for 750 students.