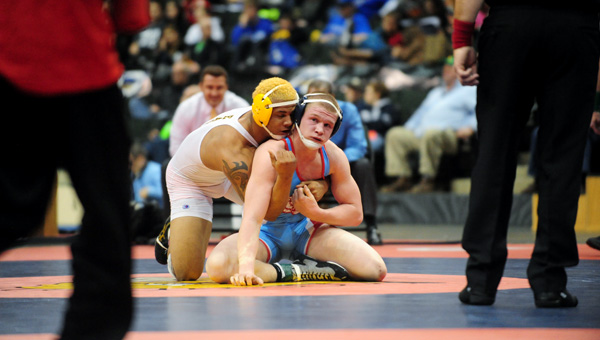 Triston Westerlund wrestles David Johnson of Apple Valley in the final round of the state wrestling tournament Saturday in St. Paul. Westerlund fell by a 9-3 decision. –Brandi Hagen/Albert Lea Tribune

ST. PAUL — Triston Westerlund of Albert Lea ended the season 42-6 and earned the state runner-up spot in the 182-pound weight class of Class AAA as a sophomore.

In the first period of the championship match, David Johnson of Apple Valley (28-1) lit up the scoreboard first with a takedown to take a 2-0 lead. Westerlund earned an escape, but Johnson took the momentum back at the end of the first period with another takedown (4-1).

Early in the second period, Westerlund went on the offensive. However,  Johnson earned an escape. Then, Westerlund narrowly missed a takedown when the wrestlers went of the out of bounds.  Johnson finished the third period with two more takedowns to win 9-3.