What to do with old Walmart? 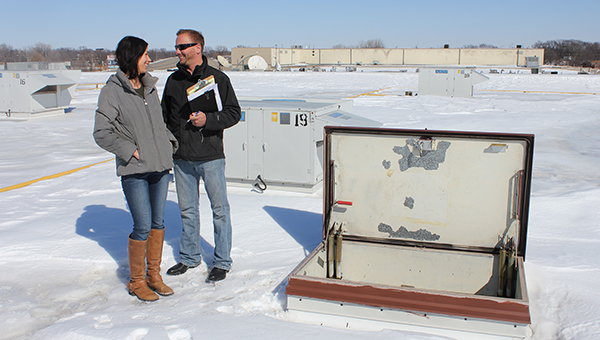 Robert and Angie Hoffman stand on the roof of the former Walmart store in Albert Lea on Thursday. The two owners of Complete Realty hope to lease or sell the building on behalf of its owner. –Tim Engstrom/Albert Lea Tribune

When realty broker and property manager Robert Hoffman posted a question on Facebook last month about what should be done with the former Walmart building, it received 105 responses.

Hoffman does double duty with the location. He and his wife, Angie, are the property managers to maintain it. Robert also is the real estate agent working to sell it. The couple owns Complete Realty, which specializes in property management, rentals, inspections and sales. 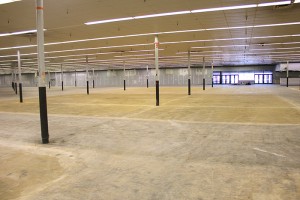 An orchard of poles occupies the interior of the former Walmart building in Albert Lea. The new drywall was hung on the walls this winter.

Though many people think the former Walmart is part of the Skyline Plaza property, it is not. It abuts the Skyline Plaza, but the old Walmart actually sits on its own 8.36-acre parcel. Its address is 1721 W. Main St.

The store was built in 1985, when the Arkansas-based discount retailer grew its chain by going into regional centers in the Midwest like Albert Lea. The 85,000 square feet of retail space were abandoned in October 2003, when a Walmart Supercenter opened on Blake Avenue.

So why did the old store sit vacant? The new store paid the lease and taxes on the old store, Hoffman said, and that lease had a noncompete clause. Nothing retail that might compete against Walmart could take over the lease.

“And what doesn’t compete against Walmart?” Hoffman asked.

However, that lease ended at the end of January, opening the door for anything to go in there. Hoffman said the property soon will be available for lease or for sale. He is hoping to find a tenant or a buyer. The Facebook suggestions ranged from a fun center to a Hobby Lobby to a call center.

“When you have a box this big, you have to think outside the box,” Hoffman said. 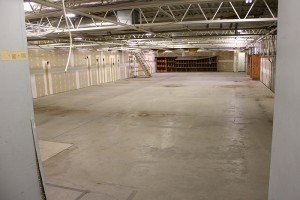 The back area of the former Walmart store has many rooms large and small on two floors. This one is the largest room of the second story.

As part of leaving the property in good shape, Walmart paid for new sheetrock walls, a new roof and a resurfaced parking lot. It even repaired all 23 heating and air conditioning units on the roof, Hoffman said, and it repaired doors that became unhinged because of strong winds on Super Bowl Sunday.

The Freeborn County Assessor’s Office lists the property as owned by Walmart Properties Inc., which Albert Lea Economic Development Director Dan Dorman said was a trust that owns Walmart real estate. He said he connected a representative with the trust to Complete Realty.

Dorman said he doubts the property will again be retail but noted many former Walmart buildings become distribution centers, medical buildings, low-ceiling warehousing or even divided up into office space.

It could be a place for an existing company to expand into, like what happened in Owatonna. Retrofit Companies purchased the 70,000-square-foot former Walmart for $720,000 in December 2012, according to the Owatonna People’s Press. Retrofit is an electrical contractor and recycler of energy-efficient lighting. It had been working out of two buildings and wanted to be in one. It plans to lease space in the old Walmart that it doesn’t use.

The estimated value of the Walmart property in Albert Lea is $1.5 million, according to the Freeborn County Assessor’s Office.

Hoffman said the property has several advantages: Interstate 90 is just up Highway 13. Nelson’s Marketplace brings a lot of traffic. The west side commercial district is right next to the most densely populated part of Albert Lea.

Dorman said he knows some local businesses have inquired about the property.

Ideas Facebook users had for the Walmart property were: