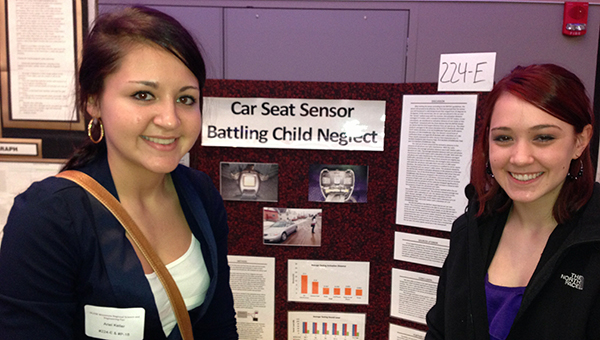 Ariel Keller and Karina Skov of Alden-Conger High School will advance to the annual Intel International Science and Engineering Fair in May after competing at the regional level. –Photo courtesy of the Alden Advance

Six students went above and beyond at the regional science fair, some of which were state winners and others winning an all-expense trip to the Annual Intel International Science and Engineering Fair.

Junior Karina Skov and senior Ariel Keller were two of the students who took their project to the next level. The two students created a project titled, “Car Seat Sensor Battling Child Neglect.” According to the girls, “We created a transmitter and receiver pair that warns a driver if their child is still located in the motor vehicle, once they have walked away,” the said.

The project, which was chosen by Keller, was initiated when she was watching news with her mom that focused on a doctor who had unknowingly left his child in his car.

“The child ended up dying,” said Skov. “Consequently, the doctor was being tried for the death of his own child. Once Ariel shared the project idea with me, we were hooked! We investigated further and discovered that children suffering from vehicular heatstroke as a result of unknowingly being left in a car is a big issue in our society. We wanted to do something to prevent this tragic series of events.”

And what did it take… a lot of work! “We spent the time we were given in physics class, after school, multiple weekends and Christmas break busily engrossed in our work,” they said. “Mr. Bosma’s science room became our second home!”

According to Skov and Keller, their goals with the project, on a small scale, were to simply get the A in David Bosma’s class. “Yet, we are go getters, so we were aiming for something more,” they said. “We had our eye on the trip to the Intel International Science and Engineering Fair. But, shockingly, we did not stop there. We hope to have an idea that will have a large impact on our world. It would be surreal if our science fair project could be implemented into the manufacturing of car seats and in turn save hundreds of lives.”

“Through science fair, I have learned that you are capable of more than you could ever believe, and it all begins with an idea,” said Keller. “In any aspect of life you will face various obstacles, but you cannot stop there, you must preserve and remember that nothing is impossible.”

Skov agrees her experience with this science fair project has shown her that teenagers can truly achieve great things if they put their mind to it.

“The passion and drive that is present at a science fair is like no other. It’s fun to see how excited people get about something they created all by themselves,” she said. “I learned that possibilities are endless when it comes to science! There is constantly something new to be learned and improved. At times it gets frustrating, but it is always worth the reward.”

By participating in science fair, Keller stated, “I have learned the importance of expressing your ideas effectively, which is always important in life. Communicating with peers and adults alike is a skill that will follow an individual their entire life.”

And the girls agree, their science teacher at Alden-Conger, Bosma, has been their motivation since the beginning. “He was the one that encouraged our idea and fueled us to be better,” they said. “His criticism at times felt overwhelming and more like nagging, but we needed every bit of it! We wouldn’t be where we are now without his guidance. He is a very smart man and an inspiring teacher. He may not take credit for it, but he is creating little scientists every day!”

Skov and Keller will travel to Ohio on an all-expenses paid trip May 1-5 with a six-day trip to Arizona to follow.