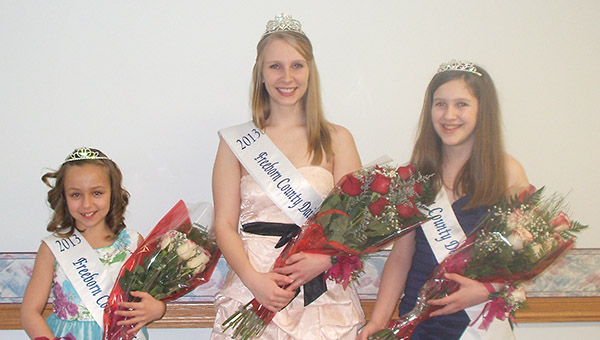 The 2012 Freeborn County Milk Maid, Aubrey Johnson, relinquished her crown to fourth-grader Makenna Jacobs. Jacobs attends Alden-Conger School and is the daughter of Matt and Bobbie Jo Jacobs, who have a dairy farm near Conger.

The 2013 Freeborn County Dairy Princess will again be Hailey Johnson.

“It has been an honor to serve as the 2012 Freeborn County Dairy Princess,” Johnson said. “It has been especially fun to be able to have my little sister, Aubrey, serve alongside me as milk maid.”

Johnson is attending the University of Wisconsin-River Falls and majoring in dairy science because she would like to attend veterinary school in the future.

Hailey and Aubrey are the daughters of David and Kristine Johnson.