An Albert Lea man has been charged in Freeborn County District Court after he allegedly led police on a high-speed chase in September in a stolen car from a residence in Albert Lea.

Thomas Eugene Vaale, 28, faces charges of motor vehicle theft and fleeing police in connection with a chase that occurred Sept. 17. 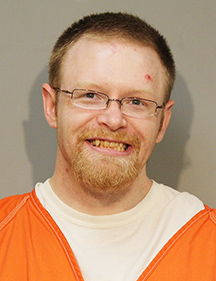 The charges had been filed previously but were dismissed so Vaale would be able to attend chemical dependency treatment without interference with his right to a speedy trial.

Court documents state Vaale reportedly stole a 2005 Lincoln LS from 1117 Foothills Circle. The owner was outside in the back of his house smoking a cigarette when he heard someone start the car and drive off.

The owner reported the theft to law enforcement, and three minutes later a Freeborn County Sheriff’s Office deputy reportedly found the car near the intersection of Freeborn County roads 22 and 25, north of Albert Lea.

The deputy attempted to pull over the vehicle, but Vaale reportedly took off at a high rate of speed, at points driving into the ditch and running through stop signs, reaching speeds of over 100 mph.

Court documents stated at one point the deputy saw sparks coming from the driver’s side of the car and saw tire fragments on the roadway.

The chase continued west on County 25, until a deputy put out stop sticks at the intersection of County 25 and Minnesota Highway 13 in Manchester. After hitting the sticks, the car reportedly went airborne, rolled and struck a telephone pole, coming to rest on its roof.

Vaale was airlifted by Mayo One helicopter to St. Marys Hospital for injuries sustained in the crash.

Court records state Vaale allegedly told deputies at the scene that he did not remember how he got the car. He claimed he had not been drinking or using drugs though he said he had used methamphetamine the previous day.

In court Thursday, Vaale’s public defender Stephen Erickson asked that Vaale be released from the Freeborn County jail on his promise to reappear at his next court hearing so that he would be allowed to continue a treatment program he was in the middle of when he was arrested on a warrant the last week in March.

Vaale likely will go to a halfway house in Mankato, Erickson said in court.

After hearing that Leuning granted his request, Erickson waived Vaale’s right to a speedy trial. He had pleaded not guilty to both counts.