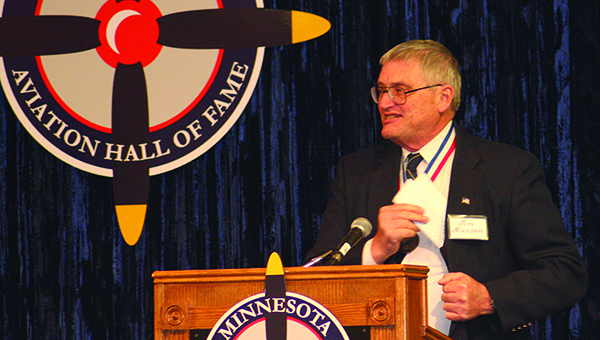 The manager of Albert Lea’s airport has received top honors from the Minnesota Aviation Hall of Fame for his work as an aviation writer over the last 16 years.

Jim Hanson, 65, was awarded the Aviation Writer of the Year Award on Saturday. He was inducted into the Minnesota Aviation Hall of Fame in 2005.

“It has literally taken me all over the world, and between flying and writing, it’s allowed me to just have incredible experiences,” said Hanson, who grew up in Clarks Grove.

Since then, he’s flown a single-engine airplane to 78 different countries and to Antarctica. He said from these experiences he has written more than 300 articles and columns.

“It literally does change your view of the world,” Hanson said.

He has had the opportunity to be on an aircraft carrier at sea, fly NASA’s shuttle astronaut training simulator and discussed aviation with a number of aviation manufacturers, industry leaders and regulators.

He said he has enjoyed seeing the feedback from his readers over the years and has enjoyed working with his wife, Maryalice, who has proofread his work.

Hanson said his writings have “opened doors to incredible adventures and given me insights into the aviation industry that I wouldn’t have had without journalist credentials.”

Hanson has worked as manager at Albert Lea’s airport since 1982.

On May 1, Hanson will celebrate 50 years since his first solo flight.

On May 4, he will receive the Federal Aviation Administration’s Master Pilot Award for 50 consecutive years of crash-free and violation-free flying.

Hanson said the FAA only has given out 2,704 of these awards across the country, and only about 30 in Minnesota — including one to Albert Lean Lawrence Olson.

An open house to celebrate Hanson’s achievements will begin at 5 p.m. May 4 at the airport.