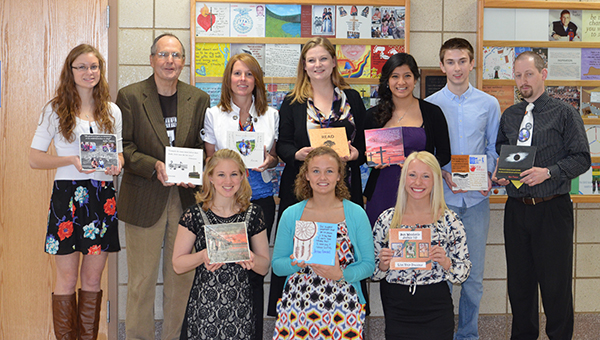 The Wall of Inspiration, which is in the high school’s commons, began in 2004 with 11 inductees. It was created in memory of Josh Kuphal, a 2002 ALHS graduate who was born with spina bifida. Shortly after graduation, he underwent surgery and died in the hospital. A committee, made up of the Kuphal family — Brian and Kathy, Josh’s parents, and Laura, his sister — and one student from each high school grade, choose inductees from nomination letters under the faculty supervision of Jim Haney.

“We had about 40 people that were nominated and all of them are great in their own way,” Haney said.

They were honored at a ceremony Friday at the high school. The following is more about each of the 10 inductees:

Viktora is a student at ALHS who is involved in FFA, National Honor Society and supermileage, among other activities. She is also involved in her church and plans to go to South Dakota State University to major in ag business. Her nomination letter said her positive leadership skills have influenced her fellow students.

Jirele taught school for 39 years and has been a substitute teacher for 12 years. He is married to his wife, Marie, and they have three sons and 10 grandchildren. Jirele has played violin for 66 years and continues to play with the Austin Symphony Orchestra. Jirele’s nomination letter said he consistently helps at the school by substitute teaching and refereeing and that he’s an inspiration and role model.

Fitzlaff is a student at ALHS who is involved in swimming, Link Crew and the National Honor Society, among other activities. Fitzlaff said she is proud that she was able to stay on the A honor roll during her high school career, even though difficult times like moving and the deaths of two family members. Fitzlaff’s nomination letter said she always has a positive attitude and is a genuine person who inspires others.

Nelson has been teaching math for 19 years and was a finalist for the Albert Lea 2013 Teacher of the Year. She is married to her husband, Jacob, and they have children, Sam and Megan. Nelson’s nomination letter said her passion for teaching is second to none and that she makes her students’ lives better.

Woodside is a 2004 graduate of ALHS who then graduated from North Dakota State University. His family includes his wife AJ, father Paul, mother Robbi, and sister Bryn, who accepted Woodside’s award Friday. Woodside currently plays professional basketball in Turkey. Woodside’s nomination letter said he’s inspiring because he lets others know that nothing is impossible if they want it badly enough.

Fiscus has been teaching science for 22 years and also coaches the high school’s robotics team, Catalyst. He was named the 2011 national space educator and was previously a finalist for Minnesota Teacher of the Year. His nomination letter said Fiscus is a good example of what a teacher should be because of his passion for educating.

Goodell is a student at ALHS who would like to go to Augustana College to become a guidance counselor. She’s editor of the Tiger Yearbook and involved in choir and Link Crew. Her nomination letter said Goodell is the type of person who can light up a room with her positive personality and that she has a kind heart.

Huerta-Apanco is involved in soccer, National Honor Society and choir, among other activities. She plans to attend college to hopefully study pre-med. Her nomination letter said her drive and ambition set her above her peers and said she inspires countless students and staff by her approach to life.

Henschel has been teaching for 12 years, and her family includes husband, Andy, and sons Drew and Alex. Henschel grew up in Brainerd and loves gardening. Her nomination letter said she is tireless and likes to create a home environment for students who are encouraged to succeed.

Jensen is a student representative on Albert Lea’s school board and is involved in cross country, speech and show choir, among other activities. He would like to go to college and someday go into the mission field. Jensen’s nomination letter said his actions to help the Feed My Starving Children organization are commendable as well as his desire to help those who struggle in the world.