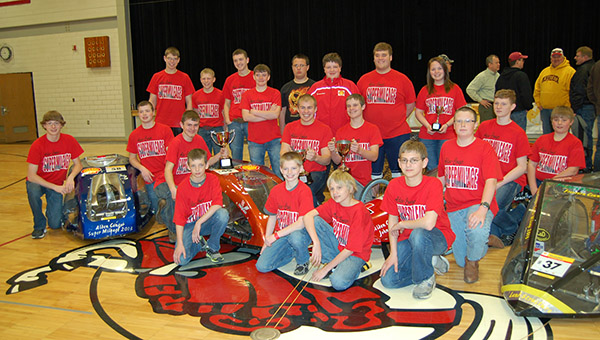 The Alden-Conger supermileage team returned from the Shell Eco-Marathon Wednesday after placing in the top three in categories. –Alden Advance

The Alden-Conger High School supermileage team returned to school Wednesday with trophies from the Shell Eco-marathon, a national competition, in Houston, Texas.

The competition among high school and college level students had between 60 to 70 teams and about 138 different cars.

The Knights’ team of 22 students won first place in the E-100 class after setting a North American record of 1,576 miles per gallon.

The team also placed first in biodiesel with 1,017 mpg. The mileage was good enough to reset the record the team set last year at 674 mpg.

In the diesel competition, Alden-Conger placed second with 1,296 mpg.

To top off their achievements, the Knights also won the safety award.

The Knights had a fourth car with in Houston, a gas car, but it placed 10th out of 31 cars.

According to David Bosma, the team’s adviser, the success boils down to the dedication of his students. Each supermileage participant is only required to put in 60 hours of work on the cars, but some have put in more than 200 hours.

“If it weren’t for that dedication, we wouldn’t be doing so well,” Bosma said.

He said some of the dedication is because the students are interested in the topic and he hopes part of it comes from his example of staying late after school to work on the cars, too.

To fund the building of their cars, the students raised $15,000 this year by asking area businesses for donations, holding a pancake breakfast, working concession stands and taking money for half-court shots during basketball games.

“If it weren’t for the businesses around here, these cars wouldn’t get built,” Bosma said. “We want to thank the community for all their support.”

This year’s team is a young one made up of one senior and the rest sophomores and freshmen.

The team’s final competition this season will be in Brainerd at the state level.

“Our goal is to repeat as E-85 winners,” Bosma said. “And we have never won the modified class up there so our goal is to win that.”

The state competition will be May 13-15.

To see more about the team’s experiences follow its blog at aldensupermileage.blogspot.com.