ALDEN — Alden-Conger senior and four-year robotics member Tommy Geesman was recently named a FIRST (For Inspiration and Recognition of Science and Technology) dean’s list finalist, the most prestigious award in FIRST robotics for individual students.

Geesman, who was nominated by robotics adviser David Bosma, was selected by a team of judges at the Northern Lights regional, which was held in Duluth the first weekend in March. 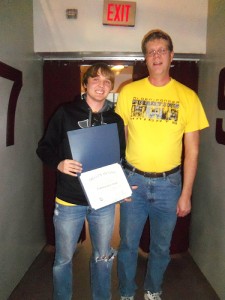 “At every regional, there are two individuals selected to be finalists,” Geesman said. “These individuals compete at the world championships in St. Louis, held April 24 through 27. At the championships, I have the chance to be selected as one of the 10 dean’s list winners.”

The dean’s list is an effort to recognize the leadership and dedication of FIRST’s most outstanding students and an award is sponsored for selected top competitors, aka FIRST superstars, stated the award guidelines. It is noted that colleges and universities are extremely interested in recruiting dean’s list award students.

Criteria for selection of the FIRST dean’s list shall include, but not be limited to, a student’s:

• Demonstrated leadership and commitment to the ideals of FIRST.

• Interest in and passion for a long term commitment to FIRST and its ideals.

• Overall individual contribution to their team.

• Effectiveness at increasing awareness of FIRST in their school and community.

The 2013 dean’s list award winners will receive the following: a unique trophy and public recognition at the championship; a written recommendation from FIRST leadership to the college or employers of their choice; a credit toward the winning student’s team 2014 registration fee; a plaque for the student’s school hall of fame; an expenses paid FIRST dean’s list award summit, at the headquarters in Manchester, N.H., and the opportunity to work with all members of the dean’s list and FIRST leaders to advance the mission of FIRST.

According to Geesman, he first became interested in robotics after seeing the robot from Alden-Conger’s first year of competition.

“Once I went through my first season on the team, I knew I was hooked and I have been very involved with it ever since,” Geesman said. “I really like how robotics gives you a complex task and a short deadline to find solutions for this task.”

The past three years, Geesman has been named captain of the Alden-Conger robotics team.

“As far as building the robot, I am mainly in charge of it’s electrical and programming aspects,” he said. “I have learned a lot from my four years in robotics. It has shown me that if you put enough hard work into something, you will be rewarded for it. It has also taught me technical skills, such as programming and wiring.”

Geesman is the son of Gary and Angie Geesman of Alden.