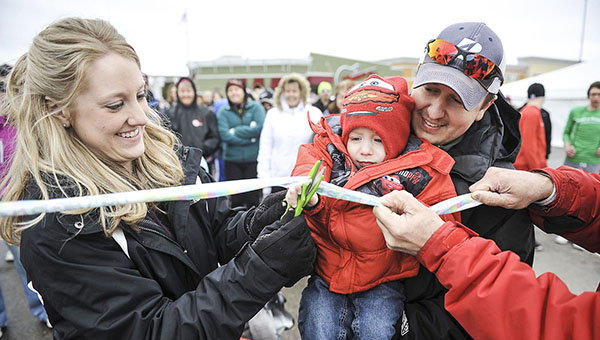 Luke Gooden, 2 1/2, cuts the ribbon with the help of his parents Megan and Brady, of Alden, to kick off the 2013 March for Babies Saturday morning. — Eric Johnson/Albert Lea Tribune

AUSTIN — This year’s ambassador child from Alden needed only three words to steal the show during the opening ceremony of the annual March for Babies.

“Thank you people,” 2-year-old Luke Gooden said into the microphone, eliciting many laughs from the crowd.

Luke, his parents Megan and Brady and brother, Owen, were this year’s ambassador family for Saturday’s 6-mile walk to benefit the Freeborn-Mower chapter of the March of Dimes. The Gooden family live in Alden. 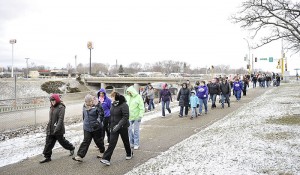 Participants in this year’s March for Babies walk along Interstate 90 after leaving the Holiday Inn and Convention Center in Austin on Saturday. This year marks the 75th anniversary of the March of Dimes.

High temperatures in the low 30s and a light dusting of snow overnight were not enough to deter the more than 225 people and seven new teams from attending Saturday.

“We have a lot of committed people and families with premature babies,” said Lisa Morehouse, the media chairwoman for the local chapter of the March of Dimes.

Organizers acknowledged the weather has been snowy or rainy the last few years during the walk, and they may discuss moving the event back a few weeks to May.

This year was a special one for the March of Dimes, as the organization is celebrating its 75th anniversary. The organization was founded in 1928 by President Franklin Delano Roosevelt to combat polio. After finding a cure for polio, the organization changed its focus to birth defects and premature births.

While volunteer Randy Kramer said progress has been made, there’s still much work to be done.

“Too many babies are still being born too early,” he said during the event’s opening Saturday.

Kramer described Saturday’s walk as a bit of a reunion for families to come together and share their stories.

Megan and Brady shared Luke’s story on Saturday. While a birth should be a happy time for parents, Megan said that is not the case for parents of a premature baby.

“When you have a premature child, your excitement is replaced with fear and anxiety, questions and possible sorrow,” she said. 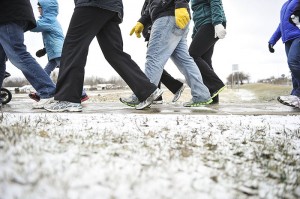 Walkers head out for the March for Babies Saturday morning, leaving from the Holiday Inn and Convention Center.

Luke was born 12 weeks early — at 28 weeks — via emergency c-section in Rochester after Megan was diagnosed with preemclampsia, a serious form of high blood pressure during pregnancy. Luke weighed less than 2 1/2 pounds, and he received surfactant therapy immediately after his birth to coat his lungs and help him breathe properly.

“We later found out that the March of Dimes had a huge role in making and funding it,” Megan said.

Despite his premature birth, Luke is now a healthy, normal 2-year-old.

“Now we have a healthy, funny and extremely stubborn and active 2-year-old,” Megan said.

Megan and Brady’s second son, 3-month-old Owen, was born full term, largely because of preemclampsia research done by the March of Dimes and other organizations.

“They knew what to look for earlier this time around,” Megan said.

Megan said it’s a miracle that babies born weighing as 2 pounds or less go on to live healthy, active lives. Megan said she and Brady know many other families who have benefited from similar treatments to what Luke received.

“We’ll always be supporters of March of Dimes for that reason,” she said. “It’s amazing what they can do.”

The Alden family led a team called the Gooden Gang and raised more than $4,000. Megan said the family will teach Luke about the March of Dimes when he’s older.

“We’ll keep telling him what a great organization it is,” she said.

Last year’s ambassadors Amber and Chad Myers were back again with sons, Garrett and Cale, and their team, Myers’ Miracles, which raised about $3,000 this year.

Amber said she and her family are committed to the March of Dimes for years to come.

“I’m proud to continue to help the March of Dimes, and I’ll continue to in all capacities,” she said.

Garrett and Cole were born Aug. 9, 2009, at 25 weeks — about 15 weeks early. Both boys weighed a little more than 2 pounds at birth, faced many health issues and had multiple surgeries.

Megan said the benefits of the March of Dimes are simple.

“It saves babies,” she said. “And our babies, we almost lost them both many times. It was the most difficult time of my life, and without the March of Dimes, we may not have them here with us today. It’s a crucial organization.”

— Kelli Lageson contributed to this article.

Additional donations can be dropped off in a sealed envelope at Wellness 1st Chiropractic, 300 Oakland Ave. W, Austin, to Lisa Morehouse.