Co-Players of the year announced

See-Rockers was instrumental in Tigers’ success 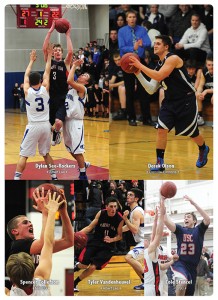 “The thing that is unique about Dylan is how competitive he is, and not just in games,” Kreuscher said. “He tries to win every drill, every competition that we have in practice.”

“After our late practices, he usually sticks around for about 45 minutes to an hour,” Kreuscher said. “As the year went on, more and more guys joined him.”

As a junior, See-Rockers averaged 8.3 points per game, and he nearly doubled his production with solid outside shooting.

“He wasn’t happy with how he shot the ball last season, so he put in a lot of time in the off season fine-tuning his shot,” Kreusher said. “He really developed a nice jump shot this season.”

See-Rockers coupled his outside game with a skill he honed as a junior while playing point guard.

“Dylan’s ability to attack and get to the rim is his best asset,” Kreuscher said.

Another asset See-Rockers possessed was the confidence to make big shots in high-pressure situations. In the first round of the sectional playoffs, the No. 6-seed Tigers traveled more than 100 miles (0ne way) to play No. 3-seed Red Wing. With less than 30 seconds left in the game, Albert Lea trailed by two points. See-Rockers came through for Albert Lea with a clutch 3-pointer to give the Tigers the lead. Red Wing made free throws down the stretch to advance to the next round, but the Albert Lea could not be faulted for their effort.

Red Wing went on to upset No. 2 New Prague in the second round 73-66, before losing to state runner-up Austin in the sectional final.

See-Rockers also stepped up his defensive game to lead the team in steals.

“I remember he struggled as a sophomore at times to guard guys in practice, and he took it as a challenge to improve his defense,” Kreuscher said. “This year, he was tremendous on defense.”

Off the court, Kreuscher said See-Rockers is a good model for young athletes and the city of Albert Lea.

“Our school and community couldn’t ask for a better example of what a student athlete should be,” he said. “I don’t think I’ve seen a player have as much straight-up respect from his teammates and classmates.”

See-Rockers is undecided on where to go to college, but he hopes to keep playing basketball.

Olson leads Glenville-Emmons on and off court

Glenville-Emmons guard Derek Olson led his team to six wins, and he led the area by averaging 17 points per game.

“Derek did a great job of improving his leadership abilities in the time that I’ve known him,” Matson said. “He has always been a lead by example guy, but the way he progressed as a vocal leader this past season really impressed me.”

The Wolverines lost a group of seniors after last season’s 17-10 overall record, so the team needed someone to take the lead.

The Glenville-Emmons struggled early, amassing a 1-12 record, but the Wolverines didn’t give up. They won three of their next four games: 63-42 over Houston, 62-48 over Mabel-Canton and 56-53 over Alden-Conger.

In the first round of the sectionals, the Wolverines were scheduled for a rematch against the Knights.

Olson led Glenville-Emmons with 22 points. He had to go to the locker room at one point with a bloody nose, but he ran back to the court with a piece of cotton in his nose and re-entered the game.

“He’s willing to do whatever it takes to be successful, and he’s never afraid of a challenge,” Matson said. “It’s that mindset that led to his great accomplishments in athletics as well as in the classroom.”

Olson has passed many milestones in his time with the Wolverines. Last year, he set a record with 91 3-pointers on the season. This year, he broke that record with 100. Over his career, he scored 1,015 points.

“He has put in countless hours in the gym and the weight room to get to where he is now,” Matson said. “His work ethic is just unrelenting.”

In the classroom, Olson has a 3.95 grade-point average, which has contributed to an academic scholarship at Division II Upper Iowa University in Fayette, Iowa.

At Upper Iowa, Olson will play football. He was an All-Area selection at running back earlier this year. Olson earned 1,184 all-purpose yards. He rushed for 798 yards on 160 carries and recorded 44 tackles.

Olson re-wrote the Wolverine record books for 3-pointers in a season (100), and he scored 1,015 points over his prep career. He led the area in scoring with 17.0 points per game.

See-Rockers led the Tigers in scoring (15.7 points per game) and at the charity stripe (78 percent). He was named the team MVP and was a Big Nine All-Conference Selection.

Stencel led the Rebels in scoring with 14.5 points per game, which tied him with Tyler Vandenheuvel for the third-highest scoring average in the area. He also grabbed four rebounds per game and dished out three assists per game.

Vandenheuvel led the Tigers with 74 3-pointers on the season. He earned Big Nine All-Conference accolades and scored 14.5 points per game.

Tollefson led the Panthers in scoring with 14.2 points per game along with 5.9 rebounds, 2.2 assists and 1.1 steals per game.

In addition to Voigt’s 12 points and 7.4 rebounds per game, he helped the Rebels win their first-round sectional game over Blue Earth with 29 points and 14 rebounds.

Erickson led the Knights and the area on the glass by averaging 10 rebounds per game. He also earned 8.7 points, 1.2 assists and 1.3 steals per game. Erickson earned seven double-doubles, was the team MVP and was Valley Conference honorable mention.

Cotter led the Vikings in scoring with 13.7 points per game. He made a team-high 39 3-pointers and earned 5.9 rebounds, 1.5 assists and one steal per game.

Kingland led the Bulldogs with an average of 13.7 points per game. He made a team-high 49 3-pointers and earned 3.9 rebounds per game. Kingland also led the team in free-throw attempts (76).

Erdman averaged 9.9 points per game for the Tigers while grabbing 6.1 rebounds per game. Erdman’s numbers were second on the team on the glass.

Peters was second on the Bulldogs in scoring with an average of 12 points per game. He also led the team in assists (67) and steals (36) and free-throw percentage (92.6).

Scherff led the Tigers on the glass with 199 total boards for an average of 7.7 boards per game. He was also a scoring threat with 8.9 points per game.

Hagen scored earned 11.7 points per game, and despite being a guard led the Vikings on the glass with 7.3 rebounds per game. He also had 26 steals on the season.

Sena was dubbed “the floor leader” by Albert Lea head coach Lucas Kreuscher. He earned 3.4 assists and 7.7 points per game.

Kalis led the Panthers on the glass with an average of 7.2 rebounds per game. He was also a threat offensively with nine points per game.