Area Coaches of the Year named

The Tigers are still chasing .500, but they’ve come a long way since Kreuscher — the boys’ basketball coach of the year — took over four years ago.

Kreuscher inherited a program that was 1-26 during the 2008-09 season, and the Tigers have been on an incline ever since. Albert Lea won four games in his first season, six in his second season, eight in his third and 12 this year. 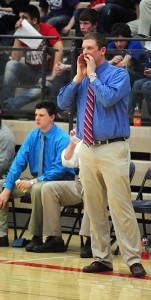 Lucas Kreuscher, head coach of the Albert Lea boys’ basketball team, gives the his team instructions against Red Wing in the postseason on March 6. The Tigers competed with top teams in the state this year. — Micah Bader/Albert Lea Tribune

“These guys embraced the challenges they faced every night as much as any group I’ve ever coached,” Kreuscher said. “Our kids did a great job of competing every day in practice.

“They were very consistent, which I felt led to their success in games.”

The Tigers showed they could play with anyone this year. In the fourth game of the regular season, Albert Lea took Austin — the state runner-up — to double overtime. The Tigers also had a near miss at Red Wing, a team that lost to Austin in overtime in the Section 1AAA final.

“Lucas is passionate about basketball and teaching the game to our students,” Albert Lea athletic director Chris Chalmers said. “He has big goals for Tiger basketball and enjoys working toward those goals.”

A solid lineup apart from the starting five was part of the success Albert Lea’s program had this year, Kreuscher said.

“Our depth continued to improve all year,” he said. “We always felt that we had some really good options with guys who started or came off the bench.”

The strides the Tigers made during the season are epitomized by a pair of meetings with Red Wing. A game after Albert Lea won its season opener 65-60 over New Prague, the Tigers lost 77-49 at Red Wing. In the first round of the sectional tournament, Albert Lea faced the Wingers in a rematch with higher stakes, where the loser goes home. The Tigers were within two points at halftime. Albert Lea took a one-point lead with less than 30 seconds left but fell 59-56.

Albert Lea swept Big Nine Conference foes Rochester Mayo, Rochester Century and Faribault. Midway through the regular season, the Tigers were given the opportunity to play against Duluth Denfeld at the Target Center in Minneapolis.

“Our guys were able to play in some great atmospheres all year both at home and on the road,” Kreuscher said. “It was great having all three of our levels play at the Target Center. It was a tremendous experience for the kids.”

Kreuscher’s first coaching gig was when he was 20 years old, as he took the reins of the ninth-grade girls’ basketball team at Cedar Rapids Kennedy in Iowa.

“I quickly developed a passion for coaching, and it has only grown since,” he said.

Kreuscher is from Iowa, but he was very familiar with the area. He played prep hoops at Lake Mills.

“I got to work with a great staff and can’t thank them enough for the time they put into the program this year,” Kreuscher said.

The Alden-Conger girls’ basketball team has become a force in the Valley Conference since Jenny Hovendick took over as head coach two years ago.

“This season was the most fun I’ve ever had in basketball — playing or coaching,” Hovendick said. “It was a wild, crazy, emotional ride, and if I could go back and do it again, I would in a heartbeat.

“The players are really the ones who really deserve the credit for our turnaround and success.”

The Knights began the season on fire, as they won 10 of 11 games. Three straight losses slowed their momentum, but Alden-Conger rebounded by winning their next six games and the last three contests of the regular season.

“We stuck together as a team through it all,” Hovendick said.

Maintaining a high level of confidence was a key for this year’s squad.

“We went into games believing we were capable of winning,” she said. “You could see the team was more comfortable with what I wanted them doing offensively and defensively, and we were able to get beyond the basics.”

That confidence was built by work in the offseason, Alden-Conger athletic director Paul Ragatz said.

“Jenny began working with her girls as soon as she was legally able (under Minnesota High School League seasonal rules),” he said. “She scheduled them into the weight room, at camps, summer practices and in a summer girls’ basketball league.

“It paid big dividends during the season.”

Hovendick excels as a coach in many areas, but Ragatz said her best attribute is the personal connection she makes with her team.

“I believe Jenny’s greatest strength as a coach is the ability to create and nurture individual relationships with each of her players,” he said. “Those relationships are based on mutual respect.”

Hovendick is a graduate of Albert Lea high school, and she played college ball at Gustavus Adolphus College before coaching its junior varsity team for two years.

“Gustavus is where I discovered my passion for coaching,” Hovendick said. “I wouldn’t be where I am today if my coach, Mickey Haller, hadn’t given me the opportunity to learn from her.”

Now Hovendick has her own assistant: Chris Sorensen. She said Sorensen is a great teacher of the fundamentals of the game.

“He coached many of these girls when they were in middle school and gave them the tools they needed to be successful now,” Hovendick said. “He deserves a lot of credit.”

The program can take another step forward with a postseason win next year.

“I have no doubt Jenny will continue to work hard to improve herself as a coach and her returning players for many seasons to come,” Ragatz said.