Cantori to celebrate its 40th anniversary with spring concert

The Albert Lea Cantori will present a spring concert celebrating the 40th anniversary of the founding of the Cantori. The concert will be at 3 p.m. Sunday at the United Methodist Church in Albert Lea. 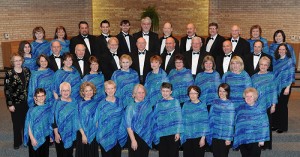 The Cantori will perform Charles Gounod’s “St. Cecilia Mass,” a work honoring St. Cecilia who lived in the second century and is known as the patron Saint of musicians and church music. She is often depicted playing the organ or other musical instruments. She suffered a martyr’s death and was said to be singing praises to God while dying. The Cantori will also perform madrigals by Dowland, Wilbye, des Pres and Farnaby.

The program will be completed by works of Dudley Buck, Samuel Barber, John Rutter and Ola Gjeilo. Soloists for the Mass will include Sherry Seberson, Mark Dundas, Jeff Laeger-Hagemeister, Jason Howland, Lori Bettin and Sue Jorgensen. The Cantori is accompanied by Gail Thurnau and directed by Eileen Nelson Ness. The concert is free and open to the public.