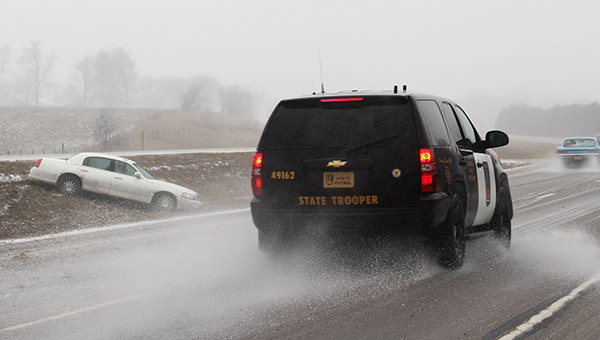 A state trooper slows to assist a motorist Thursday on Interstate 90 between Albert Lea and Alden. — Tim Engstrom/Albert Lea Tribune

ALDEN — Motorists found themselves in ditches Thursday afternoon as roads conditions deteriorated into a sloppy mess, especially to the west of Albert Lea. 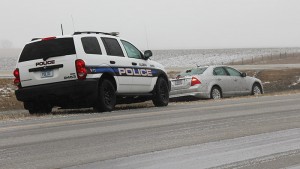 Calls for most of them began to reach dispatchers around 2 p.m. Other calls were for automobiles in ditches on Interstate 35. 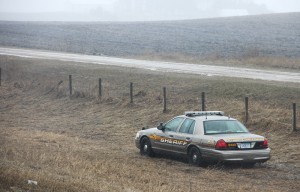 A Freeborn County sheriff’s deputy waits in his patrol car after it slid into the ditch of Interstate 90 west of Albert Lea.

Despite 70 mph speed limits, motorists on the I-90 stretch were keeping their feet off the gas pedals, traveling about 30 to 40 mph.

The roadway was a mix of slush and ice. The 10 mph wind — with 20 mph gusts — would hit curves and make conditions worse.

The scanner traffic indicated many other spinouts and slides into ditches along area freeways. An ambulance responded to the rolled Ford. No crash report was available.

Freeborn County was not in a winter weather advisory Friday. 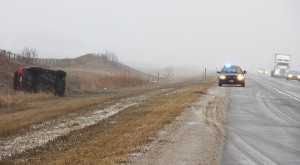 A state trooper is parked near where a motorist rolled in a red Ford Escape. An ambulance had left the scene seconds earlier. — Tim Engstrom/Albert Lea Tribune

However, Faribault County to the west and Waseca and Dodge counties to the north were. Much of Minnesota from Worthington to Grand Marais was in a winter storm warning.

Freeborn County was in a hazardous weather outlook. Albert Leans awoke this morning to a blanket of snow less than an inch thick covering the ground, plus slippery road conditions.

The wintry blast buried northeastern Minnesota under more than a foot and a-half of new snow, disrupted travel and closed schools.

The National Weather Service says 22 inches of snow has fallen in the Lake County community of Two Harbors, with 20 inches at Lake Nichols in St. Louis County.

Duluth, Proctor and Cloquet are among the school districts canceling classes Friday.

Forecasters say the winter storm will move on Friday, with light snow lingering across central Minnesota and western Wisconsin.

The Minnesota State Patrol said 16-year-old Jonathon Pohlen of Houlton, Wis., was killed Thursday afternoon when he lost control on snowy Interstate 94 in eastern Minnesota, crossed over the median and collided with a truck’s trailer.

Snowfall totals in western Minnesota varied, with 5 inches in Fairmont, 6 inches in Pipestone, 3 inches in Windom and 7 inches in Ivanhoe. Mankato had 6 inches.