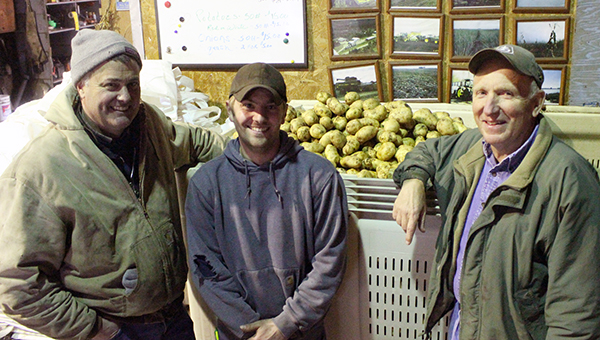 From left are Pete and Jon Van Erkel who operate Van Erkel Farms in Hollandale. On the right is Larry Reynen, who will be retiring this summer. Behind them is a big bin of Cascade potatoes, the variety used in Mrs. Gerry’s potato salad. –Kelli Lageson/Albert Lea Tribune

HOLLANDALE — After 36 years of potato crops, a longtime farmer plans to retire. Because he is a major supplier to Mrs. Gerry’s Kitchen, the decision wasn’t so simple.

Larry Reynen of Maple Island grows and sells Cascade potatoes, and supplies Mrs. Gerry’s for their potato salad needs almost all year round. When he decided he wanted to retire, there were some decisions that had to be made.

“When I started working with Mrs. Gerry, I never would have imagined where we are today,” Reynen said.

Reynen remembers Mrs. Gerry — or Gerry Vogt — stopping by his farm in her station wagon to buy five bags of potatoes in the early 1970s. From there, the size of her order grew because her business kept expanding.

“It was a natural progression,” Reynen said.

In the late ’70s, Vogt would come buy 150 bags of potatoes every two to three weeks. Then business really took off, and the company worked with Reynen to ensure they could keep buying local potatoes when possible. When they asked him to be able to keep potatoes throughout the year — which would require installing refrigeration — he agreed but said they would need to start contracting.

“That helped both of us out,” Reynen said.

Reynen said that though there have been tough years — because potato crops are volatile — that it’s been a good line of work. He enjoys potato farming.

“There’s never been one day I haven’t enjoyed getting in my pickup and going to work,” Reynen said. “And even though there are challenges every day, it’s a great occupation.”

Administration at Mrs. Gerry’s was happy to be a part of figuring out what to do when Reynen retires. Luckily there just happens to be one other potato farmer in Hollandale, though there used to be hundreds of families that farmed potatoes, onions, carrots and other vegetables.

That farmer is Pete Van Erkel, who right now grows seed potatoes and sells them not only to Reynen, but to other potato growers around the country. He also grows onions and carrots for processing that he sells to food processors in Rochester and Owatonna. He will have to change up his operations a bit, from growing just seed potatoes to the full-grown Cascade potatoes Mrs. Gerry’s needs, but he said he’s up for the challenge.

“I look forward to it,” Van Erkel said.

Mrs. Gerry’s Director of Purchasing Chad Vogt said the company was glad to be part of the change.

“The ultimate goal of Mrs. Gerry’s is to keep the product in Hollandale,” Vogt said. “The peat dirt there grows the best potatoes.”

Vogt said the company has had an excellent relationship with Reynen and said he anticipates the partnership with Van Erkel also will work smoothly.